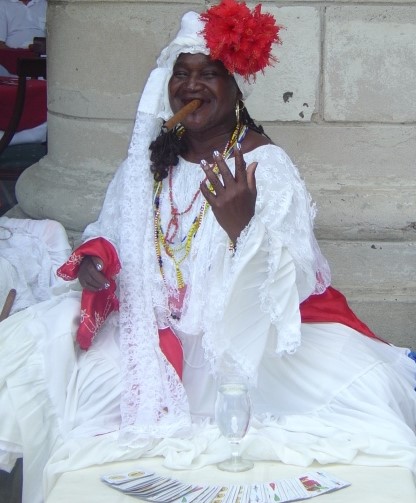 Cuba is a Caribbean country that has lived with socialism and communism since the Revolution in 1959 under the leadership of Fidel Castro. After Fidel Castro, his brother Raul Castro led the country. The incumbent since 19 April 2018 is Miguel Diaz-Canel. Irrespective of the freedoms, economic and political, the country has seen the practice of all religions and people of all races living with a kind of legal and social security. Cuba has practitioners of Christianity (Catholicism and Protestantism), Judaism, and also Santeria. One can find a santera in Cuba like one may find a fortune teller with a parrot in India. The santera is usually a woman and clad in white clothes.

The Santeras in Cuba are always dressed in white. The white clothing symbolizes purity. The santera has a dual functionality: She is a priestess of the santeria, and a healer of illness or bad luck or both. The illness can be mental or physical or both. The enigma of allurement of santeras is their unconfirmed healing properties. Santeras are believed to have the power to win over the favour of the saints for removing illness or bad luck for the believers.

SANTERIA: All is Secret

Is Santeria a religion or cult? It is described both as a religion and as a cult. Santeria or Regla de Ocha or La Regla de Ifa or Lucumi or Afro-Cuban religion or Afro-Cuban religion with roots in Yoruba in Africa evolved in Cuba. It is a pantheistic Afro-Cuban religious cult grown out the beliefs and customs of the Yoruba people with aspects of the Catholic religion. Merriam Webster’s dictionary attributes Santeria to ‘a religion practised originally in Cuba in which Yoruba deities are identified with Roman Catholic saints’. Santeria is Spanish word meaning ‘worship of saints’. The practitioners of santeria through santeras has their own secrets and beliefs including trance and divination but nothing is written down like in other organized religions.

“Santeria is not some Cuban form of voodoo. It is a completely different form of religion, quite happily embracing Christian and pagan deities and beliefs both sacred and profane. A santera’s house is open to all to all. People go there to get help in resolving a problem – usually something to do with health. In this Afro-Cuban religion, there are countless ‘saints’. It is known, in fact, as the ‘religion of all the saints’ (orishas). Small altars, in each corner of the room, stand awaiting offerings; this is the price of the orisha’s intercession.  Each family has its altar and its own orisha. It is estimated that seventy per cent of Cubans believe in santeria and observe its rites, which consist of dances and trance-like states. Nothing is written down in santeria. All is secret. The white robes symbolize purity; the turban stands for rebirth,” wrote Franc Nichele in the book titled ‘Cuba’ with photos by Michel Renaudeau

Santeria is practised in Cuba and among African-Americans in the USA. It continues to be a topic of interest and research for sociologists, anthropologists and ethnologists.