At this ashram, one can hear the flow of the River Ganges and also the silence of retreat. 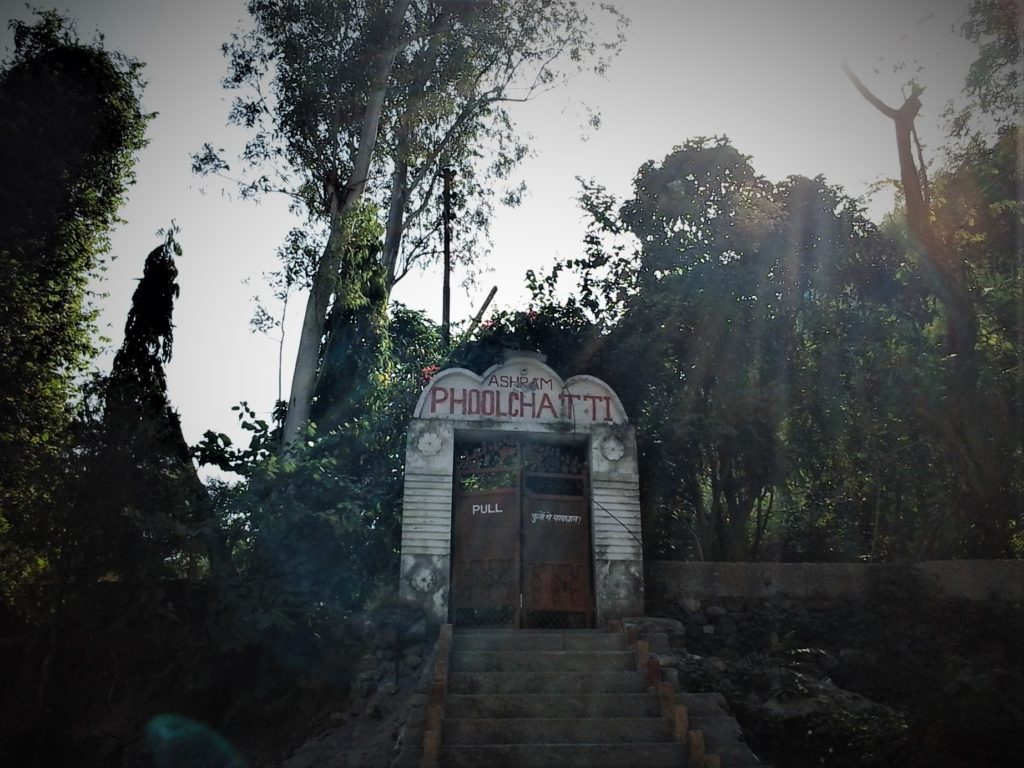 Phoolchatti Ashram is located in Rishikesh: on the banks of a tributary of the River Ganges and at the foothills of Himalayas, and closer to the bridge called Laxman Jhula (5 km from the bridge to the ashram).

Phoolchatti in Hindi means ‘land of flowers’. The ashram regularly conducts a weeklong yoga or meditation programmes and one can stay there for lodging and boarding. In its more than 120 years of existence, the ashram has basic modern facilities to its residents, visitors and guests: electricity, western toilets, hot and cold water for a shower or one can walk down to the river, phone and internet.

A tributary called Hem River is also on the doorstep of the ashram.

The place has been spotted by spiritual travellers, and continues to get a steady stream of visitors from different parts of the world.

Who started the Phoolchatti Ashram? In late 1800s a sadhu named Sri Devi Dayal ji Maharaj started the ashram to serve his fellow sadhus and pilgrims  venturing into the sacred and spiritual spots of the Himalayas in and aroud Rishikesh and Haridwar (now in the hilly state called Uttarkhand) in northern India.

Since 1977 in the 20th century, the ashram is guided by Swami Dev Swarup Nanda ji. Visitors from as far as Punjab in India to Netherlands and Germany in Europe continue to visit the ashram for they trust the swami ji and his efforts in running an ashram. In a conversation with www.monsoon2047.com, the spiritual mentor expressed concern over the growing commercialisation of activities in the foothills – hedonistic camps. But he is determined to keep the ashram free the influences of modern entertainment activities.

The ashram has an inhouse yoga teacher and meditation guru called Lalita Nand. She conducts short regular courses on yogic (spiritual) path – asanas or postures with a rigours of spiritual contemplation, guides the guests for an ashram life – chanting of kirtans, classic music of chants accompanied by instruments, pranayama (breathing), lecture, meditation, neti pot cleansing among others. She has been in the ashram since 1988 and leads a spiritual life (she gave up the bonding of family and money) of simplicity.

A couple who visited the ashram said they found the ashram quite peaceful. Mr and Mrs Raju stayed at the ashram for few days and breathed a slice of ashram life by taking baths in the River Ganges, walking in the gardens and farms of the ashram and participating in the kirtan sessions.

RKM Raju is a poet, entrepreneur and strategic business consultant based in Hyderabad but originally from Khammam district. He said the defining aspect of the Phoolchatti Ashram is its location where two tributaries of the River Ganges meet. He observed that the tributaries of the Ganges flowing down from the up hills of Himalayas are pristine till to the point of Phoolchatti Ashram but from there towards its downstream the rivers start getting polluted with the intervention of human beings’ intervention – from throwing plastic to letting sewage into the rivers. The nearest pilgrim places of the ashram are Rishikesh and Haridwar.

Raju had immersed the ashes of his deceased mother by the ashram where there is a ghat under construction. He had been to the ashram on two occasions along with his wife. He told www.monsoon2047.com that the ashram is an example for simple life. He said, “In a world where people are obsessed with money, the ashram gives a shelter for people to learn how to live a simple life. There are also trees and plants where food is sourced within the premises – shows you, you don’t need much in life.”

The ashram maintains its gardens and patches of farmlands growing vegetables and fruits that are needed for the residents and visitors.