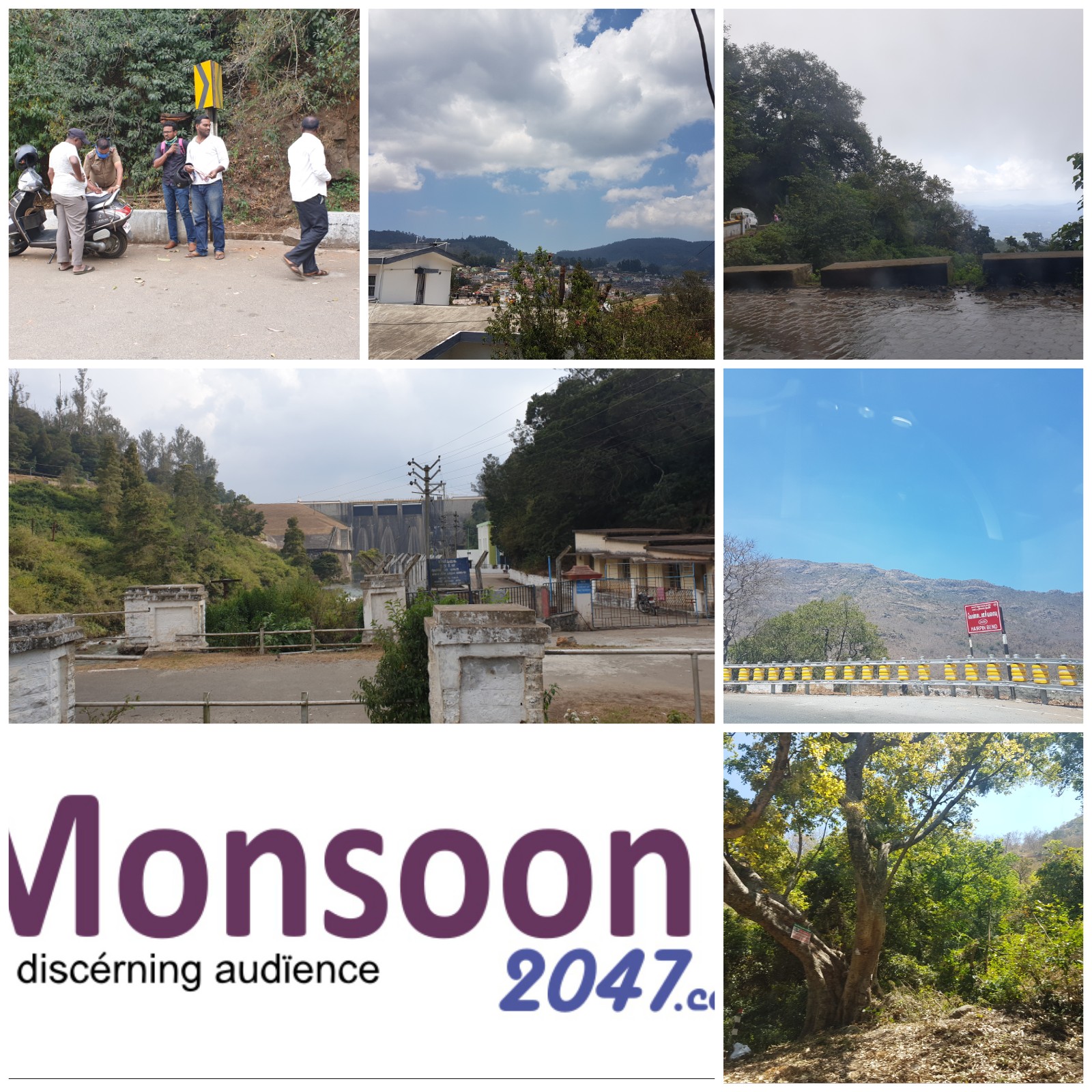 Kotagiri Ghat (State Highway 15): The route Erode – Gobichettipalayam –Sathyamangalam – Mettupalayam – Aravenu – Kotagiri (Mettupalayam to Kotagiri is 33 km and 4 hair pin bends) – Ooty. This is an oldest known route to Ooty into the Nilgiris district. This was the route taken by John Sullivan during his discovery trips to the district that began in 1819 when he was the district collect or Coimbatore under the rule of British East India company.

Kotagiri Ghat Road is of Tamil Nadu State Highway 15. It is less travelled as it is a slightly longer route from Mettupalayam to Ooty than the route via Coonoor and less vulnerable to landslips. If one wants to see more of the district, this is the most scenic ghat road of Nilgiris – spectacular views of the valley and a partial view of the town Mettupalayam. It is possible to divert from this route to Coonoor for there is a link from Aravenu to Bandishola. A traveller can reach Mettupalayam from Coimbatore and from Chennai via Erode and Gobitchettipalayam.

Coonoor Ghat (National Highway 67): Coimbatore – Mettupalayam – Kallar –Burliar – Coonoor – Ooty –Pykara. Because it passes through Kallar, it is also known as the Kallar Ghat Road. This route passes through the valley of Kallar and Coonoor rivers. It is one of the busiest ghat roads to Ooty as it is the main access road from the natives of Tamil Nadu, and those from arriving at Coimbatore airport. It has 14 hairpin-bends. The road is maintained by the National Highways Authority of India and is now part of National Highway 181. The resting spot on this route is at the village of Burliar. Unlike Kotagiri Ghat Road, Coonoor Ghat is prone to landslides during the monsoon rains: southwest monsoon, northeast monsoon. In 2010, the road was closed to the traffic due to landslides caused by rains. The National Highways Authority of India had re-laid which got eroded, again due to rains. According to a report, “In 2012, the Highways Department decided to initiate criminal proceedings against the NHAI, under Section 133 of Criminal Penal Code, dealing with acts endangering human life, due to non-maintenance of the road.”

Manjur Ghat Road (Manjur or Manjoor) Route: Karamadai (Coimbatore) – Athikadavu – Mulli – Geddai – Manjoor – Kundha Dam –Yedakadu – Mount Lawrence (Avalanji Road) – Emerald Cross Road – Muthurai Palada – Fern Hill – Ooty. Manjur Ghat Road is mainly for local traffic coming or going from Ooty to Coimbatore and vice versa. This is used as a backup road as well where the the Coonoor Ghat and the Kotagiri Ghat Roads are closed for one or the other reason. Manjur Ghat Road is the shortest ghat road of Nilgiri Ghat Roads but is narrow with 48 hairpin bends below Manjoor.

Manjur Ghat Road is narrow ghat road with 48 hairpin bends below Manjoor. At Geddai, near the bottom of the ghat at 1,885 feet (575 m) there are two hydroelectric power stations. From Manjoor, at the top of the ghat, the distance is equidistant to either Ooty or Coonoor via other district roads (ODR).

Sigur Ghat is known as Kalhatti Ghat, or Steep Ghat Raod: Route: Mudumalai – Kalhatti – Ooty. It is a short-cut branch off the Gudalur ghat at Theppakadu in Mudumalai. This route can save 30 km on the standard Gudalur route, but it is a steeper route. Sigur Ghat has 36 hairpin bends and it is closed at night time. A short-cut branch off the Gudalur Ghat Road at Theppakadu in Mudumalai connects to this road and saves about 30 km on the standard Gudalur Ghat Road for the traffic coming from Kerala and Karnataka towards Ooty. This is steepest ghat road in the district and limited to short wheel-base vehicles. It has 36 hairpin bends and is closed overnight.

Gudalur Ghat (National Highway 212 and 67): Route: Gundlupet – Bandipur – Mudumalai – Gudalur – Ooty. This is also simply known as the Mysore Ghat or Mysore Road, and the main access route from Karnataka and Kerala. Travellers from Karnataka reach Gundlupet via the Mysore-Gundlupet National Highway 212 and travellers from Kerala reach Gudalur via the continuation of National Highway 212 from Kozhikode – Sultan Bathery. During night hours, the Government of Karnataka has imposed restrictions for the vehicular traffic on the stretch between Gundalpet to Ooty passing through Bandipur Tiger Reserve (NH 212): 9 pm to 6 am, please check the timings before you travel.

Gudalur Ghat Road is also known as OOTY-MYSORE ROAD & MYSORE-OOTY ROAD: The Ooty-Mysore road is a national highway (a tourist trail of South India) starts at Ooty oo Udhagamandalam in the Nilgiris district of Tamil Nadu and ends in Mysore in Karnataka. Both the routes, Ooty-Mysore Road and Mysore-Ooty Road pass through Bandipur National Park in Karnataka and Mudumalai National Park in Tamil Nadu. The major town on this route is Gudalur. The length of the road is 158 km and it existed since 1799. On this route, from Mysore-Ooty Road, Ooty can be reached in two ways:

2) Mysore – Theppakadu –  Gudalur – Pykara – Ooty: This route is for large vehicles such as buses and lorries, 158 km. One traveller commented about this route: “The road from Mysore is arguably the most scenic with a long stretch that runs through the Mudumalai National Park, and if travelling in the early morning or late evening, you will definitely spot wildlife feeding along the road, even the odd carnivore. There are majestic stands of Eucalyptus amidst well tended tea estates as you near Gudalur, and then you drive past the Pykara Dam and Pykara falls“.

This route towards Gudalur from Ooty is the continuation of National Highway 67 (NH 67), which makes up the Coonoor Ghat.

TRAFFIC BAN: Bandipur National Park has the second highest tiger population in India located in Gundulpet taluk of Chamarajanagar district in the Indian state of Karnataka. Park is the part of Nilgiri Biosphere Reserve making it largest protected area in Southern India and largest habitant of Wild Elephants in South Asia.Bandipur National Park shares its boundary with 3 other National park namely Nagarahole National Park, Wayanad National Park and Mudumalai National park. There is ban of traffic from 9 PM to 6 AM of dusk to dawn to help to drawn down the death rate of wildlife. Animals could be spotte on this road. In the public safety and protection of wildlife, travelling on the ghat is banned by the Nilgiri District Administration has from 10.00 pm to 6.00am, for the vehicular traffic.

If you are travelling by car or on bike, check the condition of your vehicle: tyres, brake pads, engine oil, break and clutch cables: bikers should wear helmet, riding gloves and good riding shoes; carry RC papers and license.

Beware that on the ghat roads, the uphill traffic always has priority; when going downhill, pull to a side when you spot an oncoming vehicle.