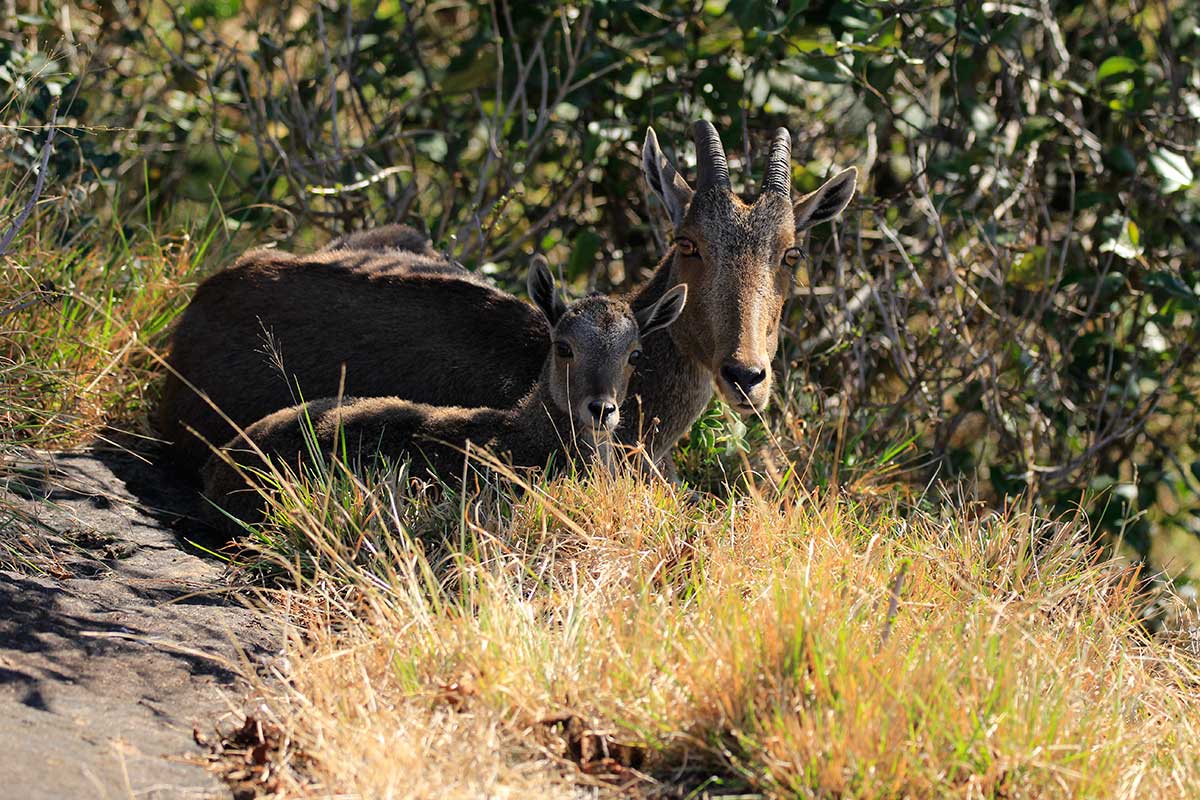 Goat is an agile, hollow-horned ruminant of the family Bovidae. It is closely related to sheep, native to rocky and mountainous regions. Goats are widely distributed wherever they are domesticated, and there are different varieties of them. In astronomy and astrology, Goat, initial capital letter, refers to the constellation and to the sign Capricorn. Informally, goat refers to a licentious or lecherous man, lecher; a victim, a scapegoat.

Nilgiri tahr is type of goat endemic to the Nilgiris district in the Western Ghats and to some parts of Eastern Ghats in peninsular India.

Nilgiri tahr (Nilgiritragus hylocrius) is an ungulate found in the Nilgiri Hills and in the southern parts of the Western & Eastern Ghats in the states of Tamil Nadu and Kerala.

Nilgiri tahr is an endangered caprid (ruminant) listed the Wildlife (Protection) Act 1972. The animal is identified as an ‘endangered’ species by the IUCN. It is endemic to the hill ranges of peninsular India in pockets such as montane grasslands, rugged terrains, fringes of the grassy plateaus, steep slabs and cliffs.

Nilgiri Tahr is related to the Himalayan Tahr and the Arabian Tahr. Nilgiri tahr avoids sholas but forages along its periphery and visits shrub lands along the base of the cliffs. It is a stocky goat with short, coarse fur, bristly mane and curved horns. Males are larger than the females. Adult male develops a light grey area or ‘saddle’ on their backs so known as saddlebacks.

Nilgiri tahr inhabits montane grassland habitats at elevations from 1200 to 2600 m of the South Western Ghats in the range of 400 km from north to south.

Eravikulam National Park is home to the largest population of tahrs followed by the Nilgiri Hills. They are found in smaller population in the Anamalai Hills, Periyar National Park, Palni Hills and other pockets in the Western Ghats south of Eravikulam.

“The Nilgiri tahr symbolizes the conflicts inherent in conservation of threatened fauna and their habitat. Their number totals around 2200-2500 individuals in the wild. Nilgiri tahrs exist only in small, isolated populations due to extreme habitat fragmentation and illegal hunting. They are, as a result, vulnerable to local extinction. The reasons for the decline of tahr populations have not been fully understood. Despite several studies over the years, there are only rough estimations of Nilgiri tahr populations. The species has always been under severe stress on account of the construction of numerous hydroelectric projects, timber felling and monoculture plantation of eucalyptus and wattles. All these development activities, especially the plantation activities affect the heart of the tahr habitat, which are the grasslands – sholas,” reports WWF-India. “WWF-India has conducted a comprehensive study in Tamil Nadu and Kerala to understand the present population and ecological requirements of Nilgiri tahr. It raised awareness among locals and NGOs to initiate steps towards conservation.”

World Wide Fund for Nature-India (WWF India) was founded in 1969 with the objective of ensuring the conservation of the country’s wildlife and natural habitats.