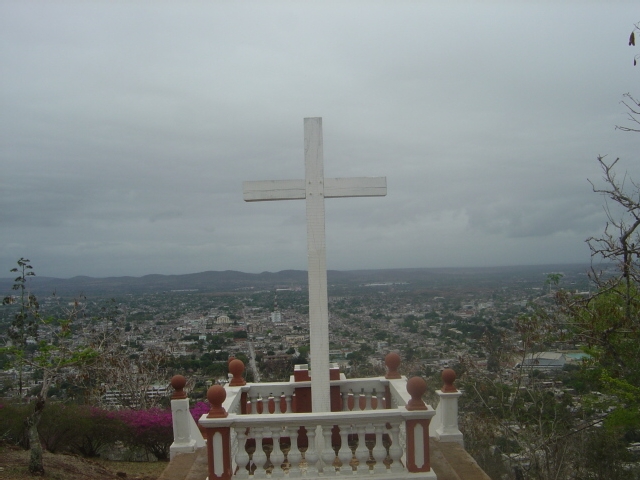 The best spot in Holguin is its hill from where one can get the full view of the habitations straddling at the foothill. The hill is named as Loma de la Cruz. One can reach the top of Loma de la Cruz by climbing the staircase of 450 cement steps and on reaching the top one can see the Cross.

Holguin is the fourth largest Cuban city after Havana, Santiago de Cuba and Camaguey. The city takes its name from its founder Garcia Holguin who founded the city in 1545. Though it is a city it has the feel of a town without much buzz and without too many tourists. The city has an international airport and well connected to other parts of Cuba.

The noteworthy places to visit nearby Holguin are Villa El Quinque, Villa El Cocal and Playa Pesquero the resort. Holguin is also the capital city of the province called Holguin, earlier it was part of the biggest province called Oriente. Holguin has well maintained small parks such as Parque Infantil, Parque San Jose Parque Marti, Parque San Isidore and Calixto Garcia. The city has a science museum and a history museum.

The medieval church in central Havana stands intact to this day, named as San Jose Church or Church of San Jose in Holguin. It has its origins to eighteenth century’s Franciscan friars.  The Franciscan friars wanted to bring reading and writing skills to the local population through the religion and established a convent. During the nineteenth century, the church was at the focal point of battle between the Spanish colonialists and mambises – mambises are those Cubans who fought for Cuban independence. The friars, the convent and the Spaniards has disappeared and in their place are the church attendants, the church and the Cubans, in the twenty-first century.

Oscar Hijuelos, the Pulitzer Prize-winning US author, has a connection to Holguin. His parents were born and raised in Holguin before they had immigrated to the US. He was the first Hispanic to win the Pulitzer Prize for fiction – The Mambo Kings Play Songs of Love.