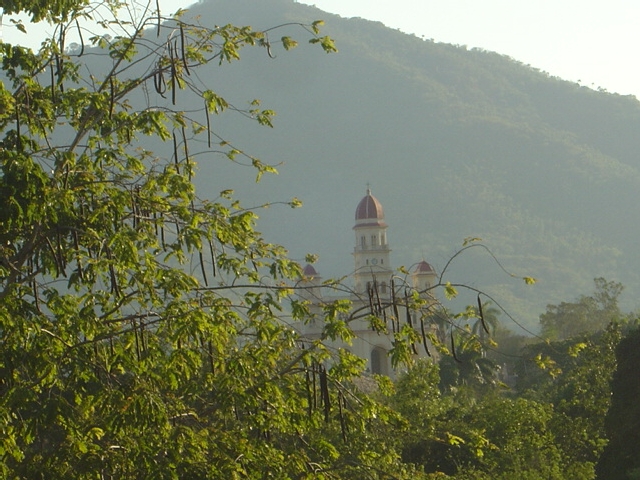 The Basilica del Cobre is the most sacred place in Cuba. It is located on the outskirts of Santiago de Cuba the south-eastern city in an erstwhile mining town called El Cobre. In El Cobre on the outskirts of Santiago de Cuba, about 20 kilometres, there is neither gold nor copper but Cuba’s most sacred pilgrimage site. The site remains untouched by the revolutions and uprisings and to the changes of socio-political landscape and remains intact to the digital age of twenty-first century.

Virgen de la Caridad is the religious patron since 1916. The basilica was built in 1926 which exists to this day standing prominently on a raised platform and surrounding by hills. The canonical coronation for the image of the Blessed Virgin Mary or Virgen de la Caridad, was granted by Pope Pius XI on 20 December 1936.

“In the first decade of the seventeenth century, her wooden statue had been found floating on the waters of the Bahia de Nipe, south-east of Holguin. Since then, El Cobre has become very much a Cuban version of Lourdes. Crowds of the sick and infirm come to the basilica as pilgrims, hoping to be cured, offering the Virgin whatever they can afford. You can see the gifts they leave: balls, toys, bicycles, radios,” wrote Franc Nichele in a book coffee table book titled ‘Cuba’ with the photographs of Michel Renaudeau.

Ernest Hemindway, the Nobel Prize winner for literature, also offered his medal as offering at the Basilica de la Virgen de la Caridad del Cobre.  “Ernest Hemingway himself, already sick offered the medal awarded by the Swedish Academy when he won the Novel Prize for Literature. The Virgen de la Caridad is worshipped by Christians and devotees of santería alike. In the pantheon of santería divinities, she goes under the name Ochún, as sensual as she is beneficient,” observed Franc Nichele.