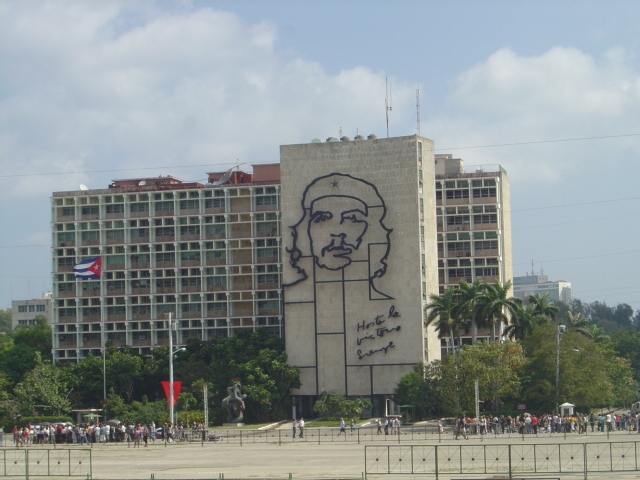 Like Jose Marti, Che Guevara is one of the iconic figures of Cuba who appears on the billboards or a street named after him or a bust of him. Ernesto Che Guevara (14 June 1928 – 9 October1967) was born in Argentina, lived and worked in Cuba and assassinated in Bolivia. He was a Marxist revolutionary, doctor, author and served as a minister in the Fidel Castro’s government in the 1960s.

“In capitalist society man in controlled by a pitiless law usually beyond his comprehension. The alienated human specimen is tied to society as a whole by an invisible umbilical cord: the law of value. This law acts upon all aspects of his life, shaping his course and destiny.” –Che Guevara in Man and Socialism. “The laws of capitalism, which are blind and are invisible to ordinary people act upon the individual without his being aware of it. …”

One of the famous image of Che Guevara is a photograph taken by the Italian photographer Alberto Korda on 5 March 1960 at the La Coubre memorial service for those who died in an explosion –about 100 Cubans died in the explosion (Fidel Castro blamed the USA for the explosion but the USA denied its involvement). That photograph is called Guerrillero Heroico – the most iconic photograph of the Marxist revolutionary Che Guevara. An image of Alberto Korda’s photograph of Che Guevara, presented in a black steel frame, overlooks the Plaza de la Revolution in Havana. The steel sculpture is in likeness of Che’s photograph taken by Alberto Koda. And at the bottom of the mural is that utterance: Hasta La Victoria Siempre.

“The peasant, migrated from afar, eager for freedom, working to root out his sustenance from the newly dug land, had by dint of his labors coaxed the coffee plants to grow on the craggy slopes where creating anything new entails sacrifice—all this by his own sweat, in response to the age-old longing of man to possess his own plot of land, working with infinite love this hostile crag, an extension of the man itself.” –Che Guevara

The Plaza de la Revolution or Plaza de la Revolución or the Revolution Square is the biggest square in Cuba and one of the largest squares in a city in the world. The square in Havana is spread over 11 acres. It was designed by the French Urbanist Jean Claude Frostier during the Fulgenico Batista’s rule in Cuba (1940-1944 and 1952-1959) and was known as Plaza Civica. But Fidel Castro changed the name of the square as Plaza de la Revolución. Around the square are the Cuban government’s departments, and the empty space serves as the venue for rallies especially for 1 May Day.