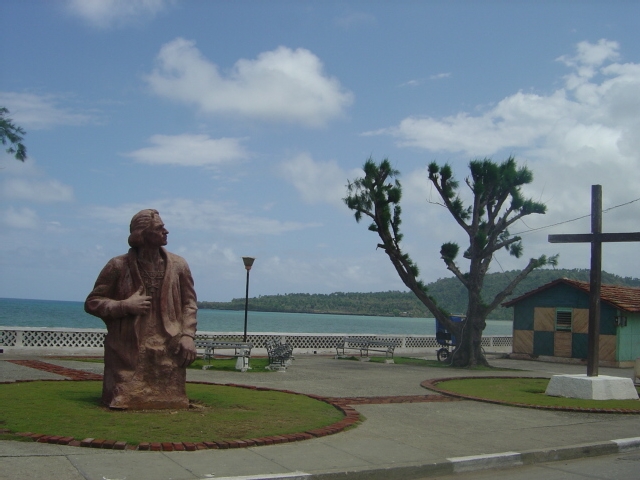 Baracoa is a small coastal town in Cuba. It is the first town founded by Diego Velazquez in 1511 AD and it was the capital of Cuba for four years from 1739- 1742. The town is sandwiched between Atlantic Ocean and the imposing sierra in a horse-shoe bay. Whichever the side you see, you see either the tropical hills or the sea. The town offers many things that other towns and cities cannot offer in Cuba: sernity, rich dose of history, malecon – seaside promenade that stretches from one end to the other end of the town, beaches within reachable distance, churches, and the cackle of roosters. The inhabitants of Baracoa are the descendants from a mix of French, Spanish, Haitian and African. The indigenous Taino people live to this today – they withstood the decimation of conquistadors, and could also be part of the local population.

Christopher Columbus reached Baracoa in 1492, and it is believed he planted a Cross, which was later shifted to a church called Iglesia de la Asuncion which. The church stands to this day in the heart of the town in Parque. Parque is the epicentre of Baracoa where one can find the galleries, bars and salsa clubs, churches.

There are two forts in the town built to guard the pirates and oncquistadors. But today one of them is a Municipal Museum. You get the entitre history of the town in this museum from Christopher Columbus to polymitas (the multicouloured snails) and about La Rusa the Russian who settled here and died in 1978.

The multi-coloured snail shells in the Fuerte Matachin, now the Municipal Museum, offers historical insights of the town. Christopher Columbus first landed in Baracoa on 27 November 1492. You can see his brown statue beside a huge wooden cross overlooking the town and the hills facing his back to the sea.

Baracoa is an unfrequented by tourists, and worth a visit for its history, and biodiversity. Try cucurucho: cucurucho is a sweet dish made of coconut and sugar and packed in a cone made of palm fronds.

In the centre of the town is the church called Iglesia de la Asuncion church with two turret shaped towers. The church was built in 1512 and continues to be the landmark of the town.

PLACES OF INTEREST BY BARACOA:

Rio Toa is the widest and longest in river in Cuba: about 130 km.

Five hours drive from Santiago de Cuba via Guantanamo along the La Farola by truck or by bus or one can drive. Or from Holguin via Moa. Holguin and Santiago de Cuba has good connections by flights. There is a Gustavo Pazo Rizo Airport – a tiny airport that offers flights from Havana but bookings should be made in advance through established tourist agencies.