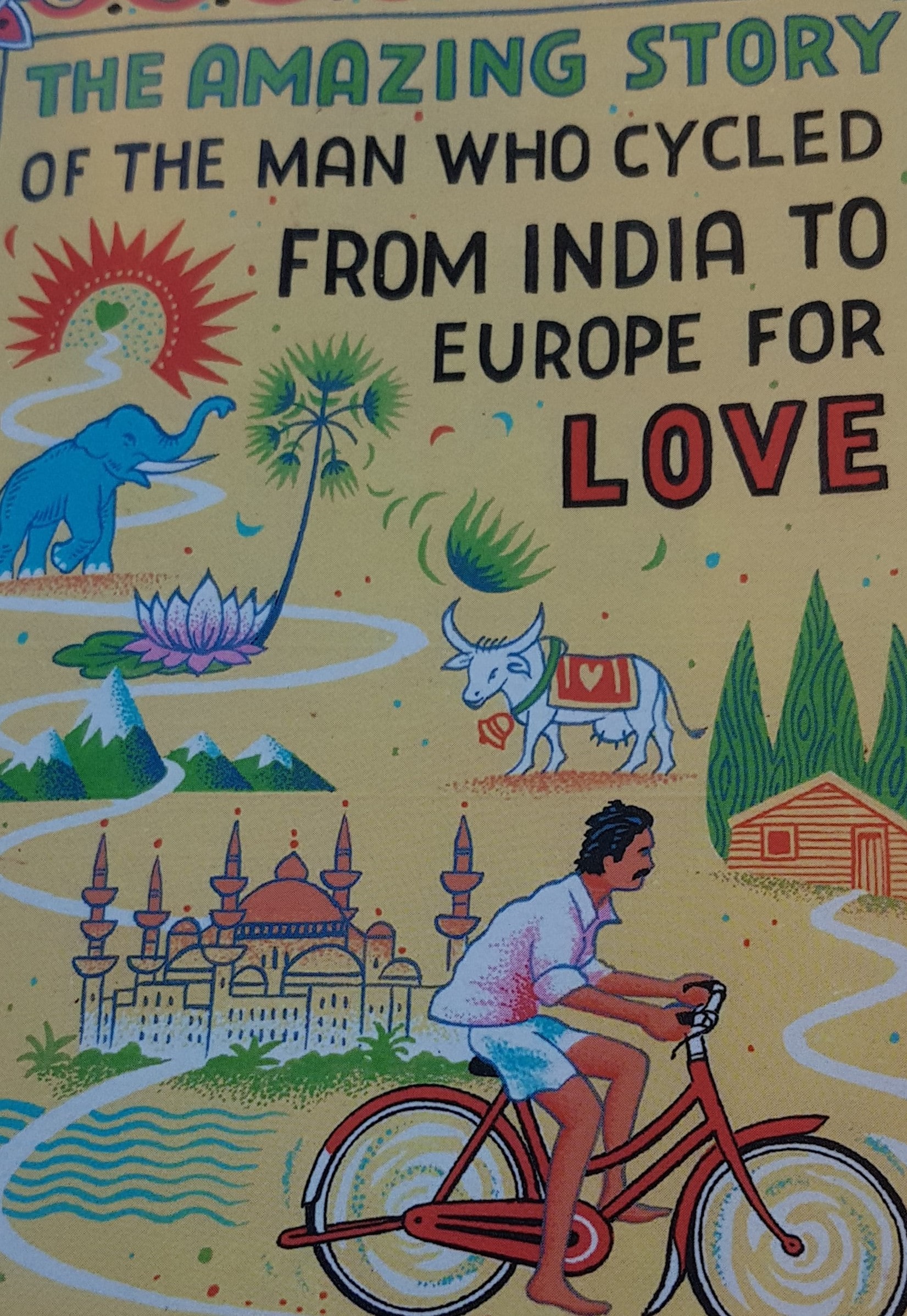 THE AMAZING STORY OF THE MAN WHO CYCLED FROM INDIA TO EUROPE FOR LOVE is the title of a biography of a man named PK Mahanandia written by Per J Andersson. The book tells about PK Mahanandia’s journey from rural India in the eastern state of Odisha to an arts college in New Delhi and how he juggled between unendurable social and financial conditions to arts and how he met a girl from Sweden in Connaught Circus and how he started his journey from India to Europe on a bicycle.

PK Mahanandia’s full name is Jagat Ananda Pradyumna Kumar Mahanandia but if you include all the titles ‘passed down from grandparents, tribes and caste, it runs to 373 letters’. The book tells the life story of PK from his birth to Dalit parents, his father worked as the postmaster in Athmallik, and discovering his talent for painting, and the wish in him to study painting at the prestigious government-run College of Arts in New Delhi. And there was a prophecy told by the village astrologer that PK would marry a woman from a distant country and that woman would own a forest!

TEN RUPEES, TEN MINUTES for a PORTRAIT in 1975

PK Mahanandia started his career as a street artist in New Delhi’s Connaught Circus while studying arts. It was in action, he was discovered by Charlotte von Schedvin who indeed own a forest in southwestern Sweden. The book mentions how she saw PK:

“Her mother had always wanted pencil drawings of her daughters, Lotta recalled as she stood by the fountain on Connaught Place. Ten rupees, ten minutes, the sign said.

“The queue was usually long, but that evening, she caught sight of the street artisit in a rare moment of solitude, gazing at the cascading water. She stepped out of the shadows and asked him a question. What it was, she can no longer recall, but the conversation was brief. She then said goodbye and quickly left. There was something about him that both attracted and frightened her, and she decided she could always turn the next day to have her portrait done.

“Two nights later, she was back in the queue by the fountain. When it was her turn, she told him she wanted a portrait in pencil. He stared at her, as if it was a remarkable request. She examined his moustache and the frizz on the top of his head that he was obviously trying to tame with a slick of grease. He flipped to a fresh piece of paper and prepared himself. His hair glistened under the streetlamps. A darker version of Jimi Hendrix, she thought. He was clearly copying the hippy style. And yet he also looked like the curly-haired forest boy from Elsa Beskow’s picture book, Bubble Muck, who lived among the lily pads and presented a fairy with a shiny ring.

“It was just after seven on the evening of 17 December 1975, and the smog-filled sky over Delhi shimmered a peach colour in the glow of the streetlights. This was to be the first time they really saw each other.”

Jimi Hendrix, originally known as Johnny Allen Hendirx (1942-1970) was an American musician: rock guitarist, singer and songwrirter. He said, “I want to do the same things with my guitar as Little Richard does with this voice.”

Elsa Beskow was a Swedish author and an illustrator (1874-1953). She wrote many books such as Tale of the Little Little Old Woman; Aunt Green, Aunt Brown and Aunt Lavender; Bubble Muck, wrote for the children’s magazine Jultomten and many more that combined realism and fantasy. The daughter of business family that came from Bergen in Norway and settled in Sweden’s capital Stockholm. She married Natanel Beskow who was a social worker, minister and doctor of theology. Their happy married life yielded six children and prominent among them were Bo Beskow the artist and Gunnar Beskow the geologist.

THE AMAZING STORY OF THE MAN WHO CYCLES FROM INDIA TO EUROPE FOR LOVE was first published in Swedish as New Delhi – Borås in 2014 by Forum and authored by Per J Andersson. It was translated to English by Anna Holmwood and published by Oneworld in 2017.