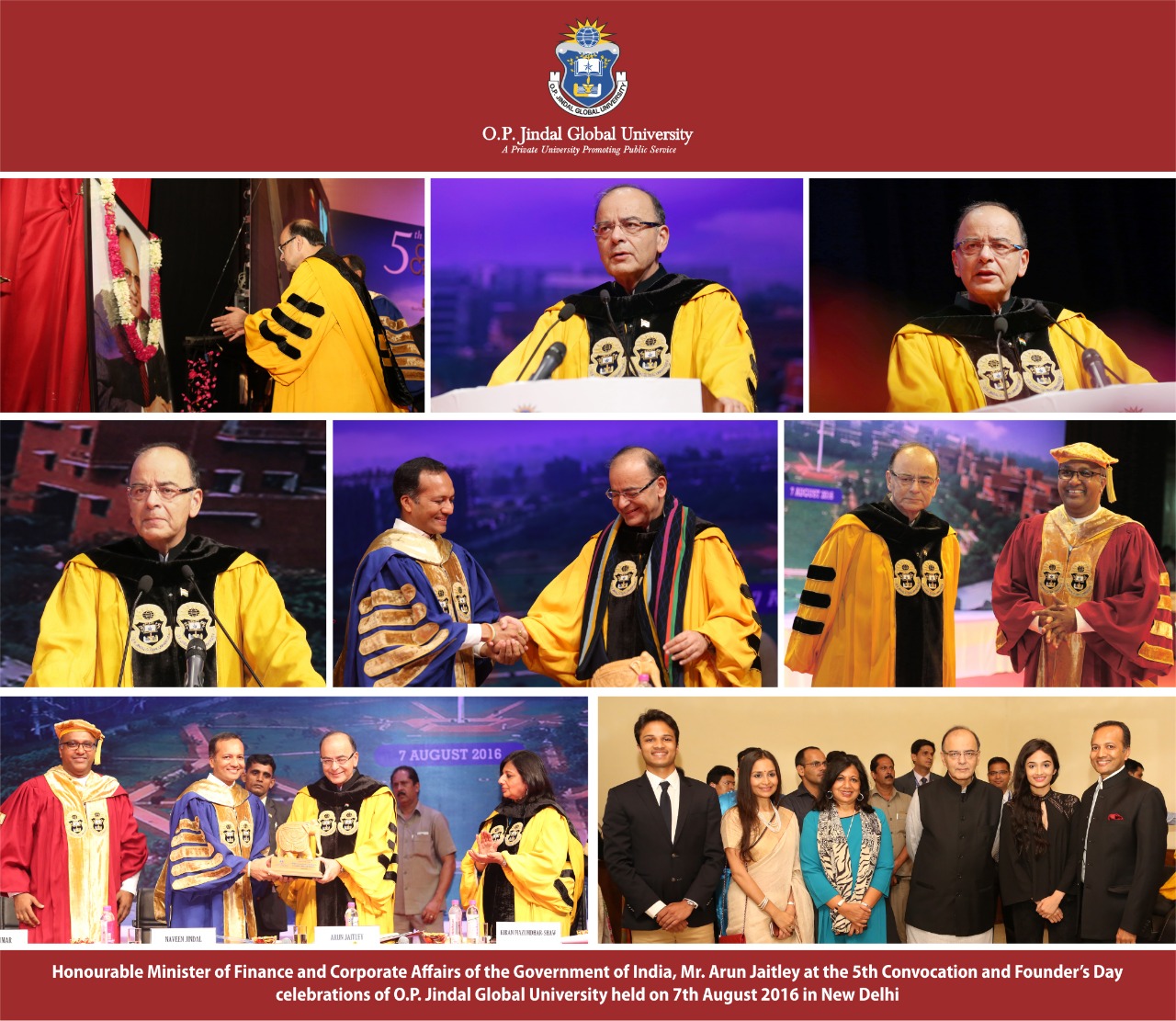 ARUN JAITLEY: An Outstanding Lawyer, a Responsible Politician and a Wonderful Human Being

On behalf of our Founding Chancellor and benefactor, Mr. Naveen Jindal, I would like to express our deepest condolences on the sad and untimely demise of Mr. Arun Jaitley, former Union Minister of Finance & Corporate Affairs.

I would like to pay this tribute to Mr. Jaitley, who left this world this morning after suffering from illness for a while. His sad demise would leave the country with the loss of an outstanding lawyer, a responsible politician, an inspiring parliamentarian, an eloquent orator, and most importantly, a wonderful human being. I have known Mr. Jaitley for exactly 25 years. I met him for the first time when I was a first year law student at the Campus Law Centre, Faculty of Law, University of Delhi in the year, 1994. I have always kept in touch with him all these years, even when I was abroad and interacted with much more closely when he was not serving in the government.

I have known him in various capacities all these years and every meeting and interaction with him had only left me with a deep sense of warmth, humility, and affection. I have many stories that I can share with you about my interaction and experiences of engaging with him, but I will share one story that is deeply connected to all of us. Since the establishment of O.P. Jindal Global University, Mr. Jaitley has been a very strong supporter of our efforts and initiatives. He always encouraged us from our modest beginnings. When we had invited him to be the Chief Guest for the 5th Convocation of JGU to be held on Sunday 7th August 2016, he not only readily accepted our invitation, but he made sure that he participated in the Convocation under very difficult and uncertain circumstances, due to a very important scheduling conflict.

I still remember very vividly that on Saturday 6th August 2016, the day before our Convocation, I received a call from Mr. Jaitley. He told me that the Chief Minister of the newly elected Government of Gujarat is being sworn in on the forenoon of Sunday, 7th August and he needs to go to Ahmedabad in the morning. He told me that he will participate in the swearing in ceremony and will take a flight from Ahmedabad to Delhi in the afternoon, as early as possible to reach Delhi by late afternoon. He also told me that he will change his clothes in the airport and will directly come to the venue of our Convocation. I was of course, very anxious about this entire plan and was even concerned whether he will be able to actually make it to the Convocation.

For those of us who were at that Convocation, we will remember that he did come to the Convocation and gave a very inspiring speech. It spoke volumes of the utmost priority that he attached to the solemn occasion of the Convocation and ensured that he participated with his customary joyfulness and gracefulness. We have interacted with him on many occasions and he has been a very big ambassador for JGU. I invite you to hear the speech that Mr. Jaitley gave at the 5th Convocation of JGU:

Mr. Jaitley had this farsighted vision to predict in 2016 that O.P. Jindal Global University deserves to emerge as an “Institution of Eminence” because of the work that we have been doing all these years. In his speech, Mr. Jaitley expressed confidence and hope that JGU will be one among the top 10 public and top 10 private higher education institutions. It was prophetic on his part to say what he said in 2016, but we all knew that he believed in us. Mr. Jaitley had many accomplishments to his credit. Mr. Jaitley was a natural trouble shooter and had the ability to build consensus even among people who had fundamental and ideological disagreements with him and his party.

The remarkable aspect of Mr. Jaitley’s persona was his characteristic warmth and the affection with which he met and engaged with people across all walks of life. Some of us who have had the privilege of meeting him on many occasions can testify to the fact that he was always generous to give time, even when he is busy with important commitments and preoccupations.

It is a great loss to our nation that such an extraordinary individual has left this world so early, leaving a void that cannot be easily filled.

Mr. Jaitley has been a great champion of JGU and we will remain eternally grateful to him for his inspiration, encouragement and support to us all these years. We will miss him profoundly and will always remember him with a sense of fondness and appreciation.