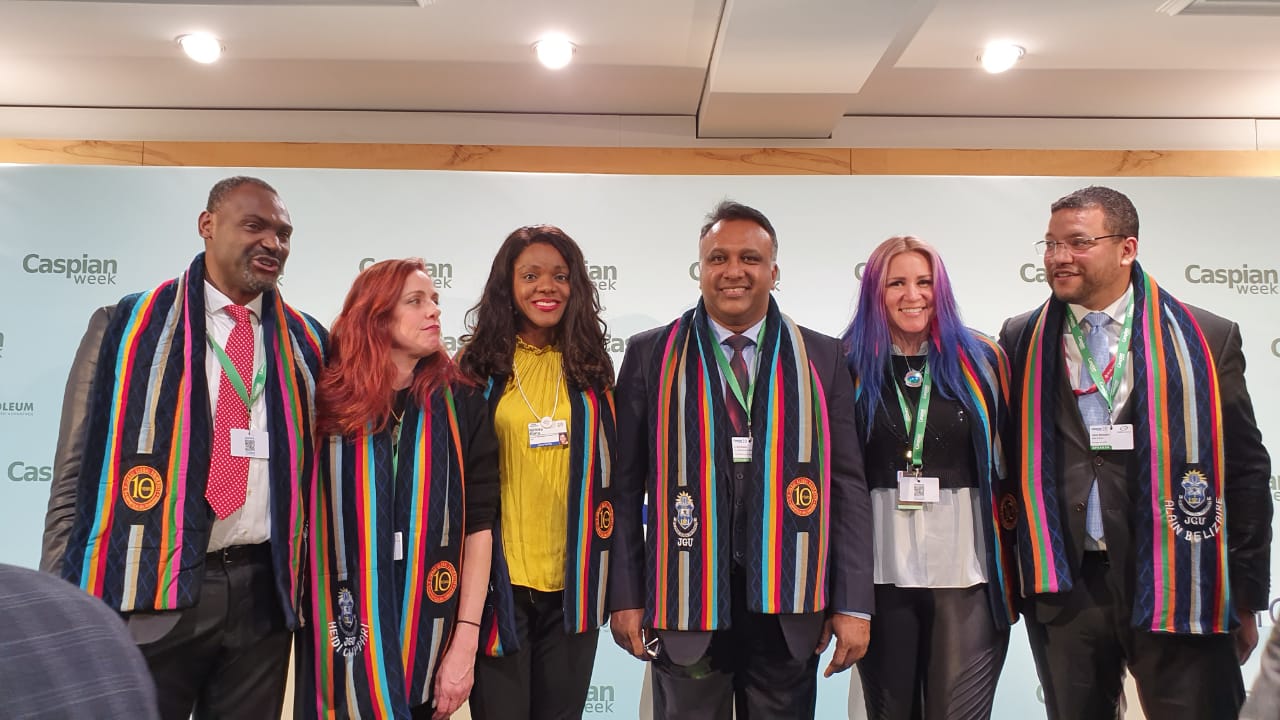 “The sustainability framework should permeate all aspects of institution building among the Universities of the world. Indian Universities can play a global catalytic role for promoting sustainable futures given the significant demographic situation that prevails in India. This is further underlined by the fact that more than 850 million in India are less than 35 years of age and India’s life expectancy has increased to 71 years,” noted Professor (Dr.) C. Raj Kumar at the annual meeting of the World Economic Forum (WEF) January 21-24, 2020 at Davos-Klosters in Switzerland.

The theme of the forum is Stakeholders for a Cohesive and Sustainable World and the participants address the most pressing issues on the global agenda. The participants are academics, politicians, representatives from business, and civil society leaders who engage in addressing the most pressing issues such as Healthy Futures, How to Save the Planet, Tech for Good, Beyond Geopolitics, Society & Future of Work, Fairer Economics, and Better Business. “Indian Universities need to focus on building leadership and imagination with a stronger focus on sustainable futures,” noted Professor (Dr.) C. Raj Kumar, the founding Vice Chancellor of O. P.  Jindal Global University. He is the only Vice Chancellor from India at the global forum raising issues related to Indian universities’ transformative role in building sustainable futures.

At the WEF meeting, Professor (Dr.) C. Raj Kumar spoke to a global audience in three separate sessions at this year’s annual meeting. He highlighted the need for bridging gaps among skills, communications and careers: “These include providing representative access, particularly to marginalised groups of citizens; balancing such access with the provision of university environments that are of global standards; helping our students bridge gaps in communication and thinking skills that can meet the requirements of globalised careers and roles; and perhaps most importantly, institutionalising efforts to identify and correct social and economic disparities.”

Professor (Dr.) C. Raj Kumar addressed at the Caspian Week-WEF, Davos 2020 and spoke at the panel discussion on the theme ‘Education & Leadership for Sustainable World’ focussed on educational leadership, sustainability, inclusive development, institutional cultural change, and pedagogies of sustainability.  Another panel discussion was on the theme ‘The Role of Global Universities in Promoting Sustainable Futures’ where the discussion focussed on challenges that universities are confronted with today and that global universities can play a specific role in advancing the cause of sustainable development, including observations about the foci of universities as they assume a leadership role in educating the youth of the world and preparing them for the future.

Professor Kumar was also invited to speak at the Times Higher Education (THE) Exclusive Davos Breakfast Debate on “What is the power of place?” Professor Kumar is the only Vice Chancellor from India to be invited to speak at Davos, and JGU is the only university from India to be included in this global round table. This THE debate was aimed at interrogating the point of ‘place’ for universities in a hyper-connected world. Leaders from government, industry and academia aimed to understand and assess critical definitions of what human talent is and how it can thrive in the 21st century. Speaking at this prestigious event, Prof. (Dr.) C. Raj Kumar focused on four core areas included:

IDENTITY OF THE 21ST-CENTURY UNIVERSITY:

On the impact of ‘Places’ on universities and how 21st-century universities are shaped by the politics and policies of their host countries and regions, he said, “The identity of the 21st-century university as the foundational base for fostering cosmopolitan and global world visions is both an imperative necessity and at the same time an increasingly difficult ideal in our age. A key question is how university leaders can negotiate within these ambiguous, complex and volatile contexts to preserve the core purposes of the university to provide safe havens for innovation, dissent and cosmopolitan worldviews.”

Assessing the impact of digital and if it has replaced physical space, he deliberated why the growth of digital technology has created a premium on face-to-face interaction and if new providers can disrupt the dominance of the HE ‘super-brands.  “It is evident that digital technology (like all other emerging technologies) is not a substitute for face to face human interactions, at least in the university setting. The centres of excellence among higher education institutions (referred to as ‘super-brands’) across the world have traditionally derived their reputation, credibility and quality of programmes from physical environments and face to face interactions, he said.

Speaking on how global networks complement local success, he expressed the view if growing nationalism, a retreat from globalization, and geo-political battles over values and valuables doomed good-faith international HE partnerships. “In recent years, there has been a growing tendency towards isolationism, particularly in developed nations such as the United States. This countervailing tendency in the US towards isolationist policies may come to place significant constraints on international partnerships in general and particularly on international higher education collaborations that depended, to some extent, on policy support and sponsorship from developed societies, the Vice Chancellor elucidated.”

There has been a focus for Universities to contribute to local communities. “Universities have a fundamental mission of teaching and research and there is a risk of becoming too focussed on social outreach in their host regions, Prof. (Dr.) C. Raj Kumar said. “In India where JGU is based, universities are integrally linked to their communities and regions. Over the past decade, many universities particularly new private universities, have been established in semi-urban regions in the country where local development is accelerated radically through the creation and sustenance of the universities.