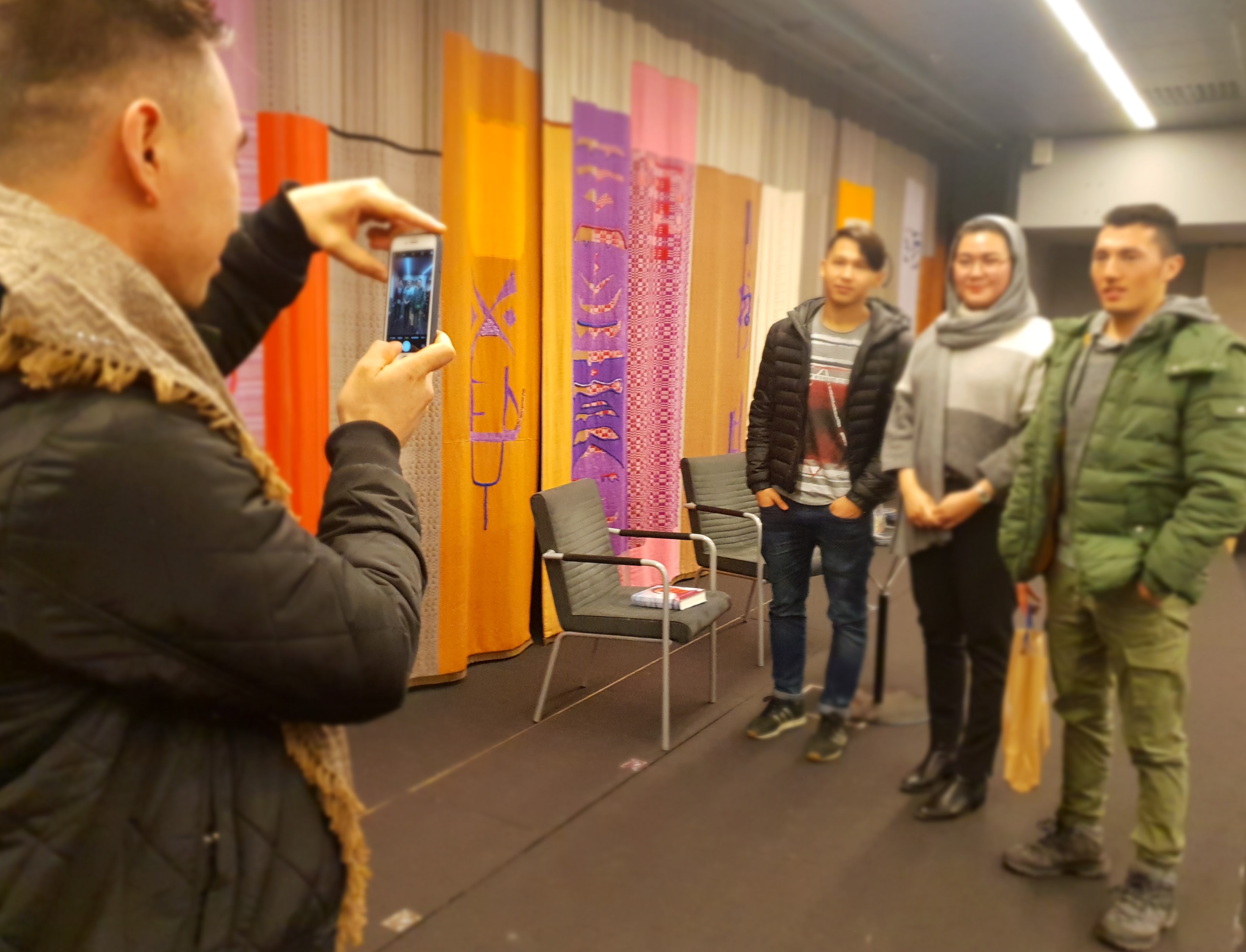 Fatemeh Khavari is a Swedish citizen born to displaced Afghan parents in Iran. She left Iran and took residence in Sweden along with her family. In short span of time, she integrated into Swedish society by learning the Swedish language and proactively participating in the affairs of the society and for the rights of fellow human beings. She started an organization through which she aims to defend the rights of vulnerable youth in the world.

In an interview for a podcast, she spoke about human rights, challenges she had faced, the rise of right wing politics in Europe and in the world, and the need to have a dialogue with civil society to overcome the fears and to challenge the prejudices that society may have for a just society. You can listen to the interview in the podcast:

Fatemeh Khavari is the recipient of Martin Luther King Prize for the year 2018. The jury said, “As a spokesperson for Young in Sweden, Fatemeh Khavari has conducted non-violent struggle with dialogue and justice as a benchmark and has shown the strength in meeting hatred with love. Through a sit-down strike that began on the Main Market Square in Stockholm, Young in Sweden (the organization) and Fatemeh mobilized young in the fight to stop deportations to Afghanistan. With her leadership, Fatemeh has managed to keep together a rapidly growing movement. She stands up for those who need it most, those who previously had no voice – in true Martin Luther King spirit.”

The Martin Luther King Prize has been awarded to individuals since 2005 in Sweden. The award has been awarded every year to a person living in Sweden who worked in the spirit of Martin Luther King. The prize is awarded to a person or group working for peace and justice. For a better society. A person or group, with a clear connection to Sweden, who shows solidarity with his fellow human beings and who finds inspiration in the ideals of non-violence. Previous award winners have included Martin Schibbye (2017), Malena Ernman (2016) and Anna Liebitis (2015). The annual awards ceremony takes place on January 15 at the Norrmalm Church in Stockholm where Martin Luther King spoke when he received the Nobel Peace Prize.

An award in the spirit of Martin Luther King is a way to celebrate his legacy of hope and reconciliation. It is a way to ensure that Martin Luther King’s spirit lives on and a way to celebrate the timeless values he fought for. It is reminiscent of the life and legacy of a man who taught us through his example – courage, truth, justice, compassion, dignity, humility and service. The award is constituted by the Swedish Christian Council, the Equmenia Church and the Christian Peace Movement, and it is verified and approved by Martin Luther King’s survivors.

When Martin Luther King was three, he had a white playmate. When the boys were six years old, his friend said his dad said they couldn’t play together anymore. Martin’s parents explained that it was because he was black and his playmate white. Martin was very shocked and decided to hate all whites. His parents, who were very loving and warm Christians, said it was his duty as a Christian to love the whites. When Martin started in high school, he took a bus to the other side of town. The rules for the buses were that blacks could only sit at the back. Although the ‘white seats’ were vacant, the blacks had to stand. Martin had to always go in the back of the bus, but he had his thoughts in the front. He said to himself ‘someday I’ll put my body where my thoughts are’. When he started college, he met many whites who were also against segregation and racism. With these meetings his disdain for the whites increasingly diminished and cooperation began to grow instead. At 19 years old, Martin Luther King begins his theological studies in Pennsylvania. During his studies he becomes more and more convinced that faith and politics are connected: “As a pastor, I will have two duties. On the one hand, I must try to change the soul of individuals so that their communities can change. On the other hand, I have to try to change societies so that the individual gets a change. Therefore, I have to worry about unemployment, slums and financial insecurity. I am a hot advocate of the social gospel.”

As a young student, Martin first had the idea that segregation in the United States could only be solved by an armed uprising. But one day he heard a sermon on Gandhi by a man who had just been in India. Martin became deeply fascinated and left the meeting with half a dozen books on Gandhi and his life. He realized for the first time that the power of love could not only affect individual relationships but also society. After completing his studies, he got a job as pastor of Dexter Baptist Church in Montgomery. In Montgomery also lived a woman named Rosa Parks. On the first day of December 1955, she refused to move from the ‘white section’ of the bus. She was arrested by the police for her crime. It became the starting point for a boycott campaign of buses in Montgomery from the civil rights movement in which Martin was active. The idea was that through massive non-cooperation, the blacks would influence the cruel rules of segregation. Since the buses were part of the segregation, they decided not to go with them, but instead walk or ride together in the few cars the blacks owned. Martin and the others in the civil rights movement were unsure if it would work. Would most black boycott buses? When the day for the boycott came on December 5, 1955 the result was much better than anyone had dared to hope. Almost 100 percent of blacks chose not to use the buses. In the evening, thousands of blacks gathered in the city’s Baptist church and listened to Martin Luther King’s speech: “We are here because of our love for democracy, because of our deep belief that democracy transformed from paper to action is the foremost form of government on earth…” That night, a group of blacks in a Baptist church started a movement that would spread throughout the nation and whose message would spread throughout the world.

When opponents of the civil rights movement noticed that violence could not stop the protests, they instead resorted to mass arrests. The Montgomery local court found the boycott illegal and arrested more than a hundred people including Martin Luther King. Eleven months of struggle finally yielded results when the United States Supreme Court ruled that Alabama’s bus segregation violated the Constitution. One of them said, “God Almighty has spoken from Washington D.C.”

King and the other black leaders wanted to spread Montgomery’s success throughout the American South. Therefore, they formed the Southern Christian Leadership Conference (SCLC) and to that he became the chairman.

Martin Luther King became a front figure for the civil rights movement and traveled around the various parts of the south and participated in several non-violent actions. The bus boycotts spread to many of the southern cities. In North Carolina and Atlanta, among other places, he participated in sit-ins at restaurants to break lunch segregation. He was arrested on numerous occasions, for example in Albany where he was accused of demonstrating without permission and disturbing the peace.

In the spring of 1963, King led mass demonstrations in Birmingham, Alabama, where white police officers were known for their violent resistance to integration. In this city, seventeen black churches and homes of leaders in the civil rights movement had been bombed. King and his colleagues thought Birmingham would be the toughest fight in the entire United States. If they succeeded here, segregation across the United States would be broken. The methods were sit-ins at segregated lunch restaurants and daily demonstrations. For six weeks, demonstrators were shown and the protesters were imprisoned.