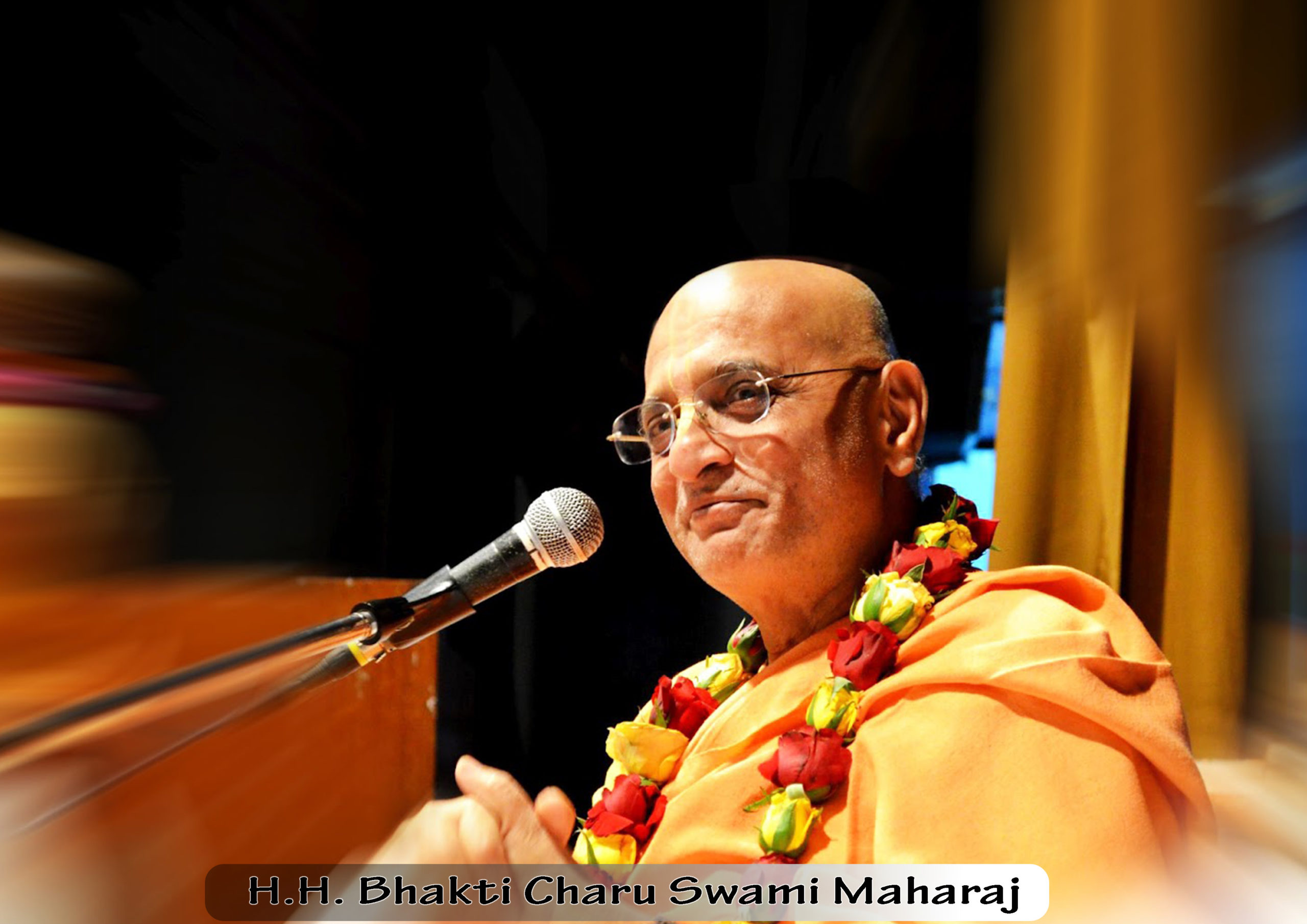 H. H. Bhakti Charu Swami Maharaj — a leading spiritual leader, disciple of A. C. Bhaktivedanta Swami (Srila) Prabhupada the founder of International Society of Krishna Consciousness (ISKCON), and a member of the Governing Body Commission (GBC) of ISKCON — passed away in Florida, the USA from the Covid-19. He was on a ventilator for the last few days and breathed his last on Saturday due to multi-organ failure. He had flown to the USA on 3 June from Ujjain in India but on June 18 in the USA, he tested positive for Covid-19 and was undergoing treatment. He was dedicated in developing ‘Veda Foundation and Cow Sanctuary’ in Deland, Florida, which was started recently. The sanctuary was initiated to spread the Vedic culture and wisdom by establishing farm communities and interpretation of scriptures through its visual media unit.

“Bhakti Charu Swami Maharaj is a great personality, pure person, genteel, and he possessed the best of Vaishnava devotee’s etiquette,” says Rathi Das, an initiated devotee of ISKCON in Texas, the USA. “As of now, the governments of India and the USA have agreed for the Samadhi of Bhakti Charu Swami in Mayapur in India for he was a great spiritual personality.” Rathi Das says Bhakti Charu Swami continued the work of Srila Prabhupada in enabling the reach of Bhagavad Gita and Hinduism to thousands of people in the West, and in India.

Bhakti Charu Swami Maharaj saw kirtan, singing and changing of the holy name Krishna, as a way to discover one’s spirituality and the pathway to spiritual sky. He said ‘just by singing, by chanting this holy name we can develop spiritually and eventually find ourselves back in the spiritual sky’.

Kirtan is a Sanskrit word, कीर्तन, and found its way to other Indian languages including English. Kirtan means singing, narrating, reciting, telling, describing, chanting of a holy name, or an idea, or a story specifically related to ancient Indian Hindu scriptures – Vedas, Upanishads, Puranas, Epics. Kirtan is also a genre of performing arts connoting a musical form of narration or a shared recitation, spiritual or religious, as in the Indian subcontinent.

“How do I appreciate kirtan,” asked Bhakti Charu Swami and explained about the significance of kirtan. “Kirtan means glorification of Krishna … when we chant glories of Krishna, then Krishna hears, and Krishna becomes pleased. In this age of Kali, Krishna descended himself in the form of holy name. Therefore we are getting an opportunity to associate with Krishna through chanting of his name or kirtan. And another aspect of appreciating kirtan is its beautiful melody, its beautiful beat, its beautiful rhythm, and when we get exposed to kirtan then automatically, spontaneously we become appreciative and we begin to dance. The dance is an expression of our inner joy. So the real appreciation of kirtan comes from our inner joy that we experience in chanting.”

Bhakti Charu Swami Maharaj (17 September 1945 – 4 July 2020) is revered in ISKCON and across the world, and also by other institutions across faiths for his interpretation of scriptures both print and broadcast formats. On 17 November 2016, Institute of International Social Development, a New York-based NGO with consultative status with the Economic and Social Council (ECOSOC) of the United Nations, awarded an accolade to Bhakti Charu Swami. The recognition was an expression of gratitude for the support he gave on behalf of ISKCON in spreading spirituality for the World Peace and Understanding between Nations and Civilizations. He established I-Foundation, a leading Hindu charity organisation in the United Kingdom.

As the member of ISKCON’s GBC, the highest governing body, he travelled all over the world to promote devotion and Krishna Bhakti and brought modern techniques to propagate Lord Krishna.

The Nectar of Devotion:

Bhakti Charu Swami Maharaj was born into an aristocratic Bengali family on 17 September 1945 and was raised in Kolkata (Calcutta), the capital city of West Bengal in India. He left India in 1970 to pursue higher education in Germany. In Germany, he discovered the richness in Vedic scriptures and started to explore of spirituality and India’s spiritual heritage. He was particularly influenced by The Nectar of Devotionwritten by Srila Prabhupada, and he returned to India in 1975. He met Srila Prabhupada and saw in him his spiritual master, and during the Maha Kumbha Mela at Prayagraj. Srila Prabhupada instructed him to translate all his books into Bengali from English and became his Secretary for Indian Affairs. He was initiated into ISKCON at Sridham Mayapur during the Gaura Purnima festival in March 1977, and during the Snana Yatra festival in Vrindavan, Srila Prabhupada awarded him the renounced order of sannyasa.

H. H. Bhakti Charu Swami Maharaj was fondly remembered for creating, writing, producing and directing the epic biographical series Abhay Charan. Abhay Charan’s over 100 episodes were broadcast on Doordarshan, the national broadcaster of India. Abhay Charan portrays Srila Prabhupada’s whole life and achievements. “Abhaya Charan” had been telecasted on Doordarshan in 1996 on every Friday and Saturday. “One of Maharaja’s unique contributions was the “Abhay Charan” television series that brought the glorious life and pastimes of Srila Prabhupada to the world on an unprecedented scale. And most recently, Maharaja again heightened the glory of his spiritual master by building a marvelous temple and devotee community in the holy city of Ujjain,” said Ramai Swami, Bhakti Caitanya Swami, and Bhanu Swami members of GBC Executive Committee.

H. H. Bhakti Charu Swami Maharaj was fond of the ISKCON project in Ujjain, Madhya Pradesh, India. Religiously, this was the place where Lord Sri Krishna, along with His brother Balarama and friend Sudama received their education from Maharishi Sandipani. Under Bhakti Charu Swami’s leadership a temple was inaugurated in less than 10 months in February 2006. The chief minister of Madhya Pradesh was impressed with his social, religious and cultural initiatives in Ujjain, and encouraged his leadership. The Ujjain ISKCON temple feeds more than 23,000 school children per day, and for this feeding project, he supervised the construction of the industrial-size kitchen, and was chairman of Annamrita Foundation.

In “Ocean of Mercy: A Search Fulfilled”, H. H. Bhakti Charu Swami Maharaj recollects his interactions with Srila Prabhupada. This book describes how he developed a genuine love and dedication for Srila Prabhupada who gave him a life of Krishna Bhakti, and thus revealed to him, to be truly an ‘ocean of mercy’.

“Maharaja served as one of the most active members of the GBC Body, he was an initiating spiritual master with many dedicated disciples all over the world, and he shared Krishna consciousness in every segment of society from simple Bangladeshi villages to the British parliament. Maharaja encouraged and advised ISKCON leaders in management and spiritual topics, he saved more than one ISKCON project in times of despair, and did his utmost to contribute to the welfare of the most vulnerable members of society,” said Ramai Swami, Bhakti Caitanya Swami, and Bhanu Swami members of GBC Executive Committee.