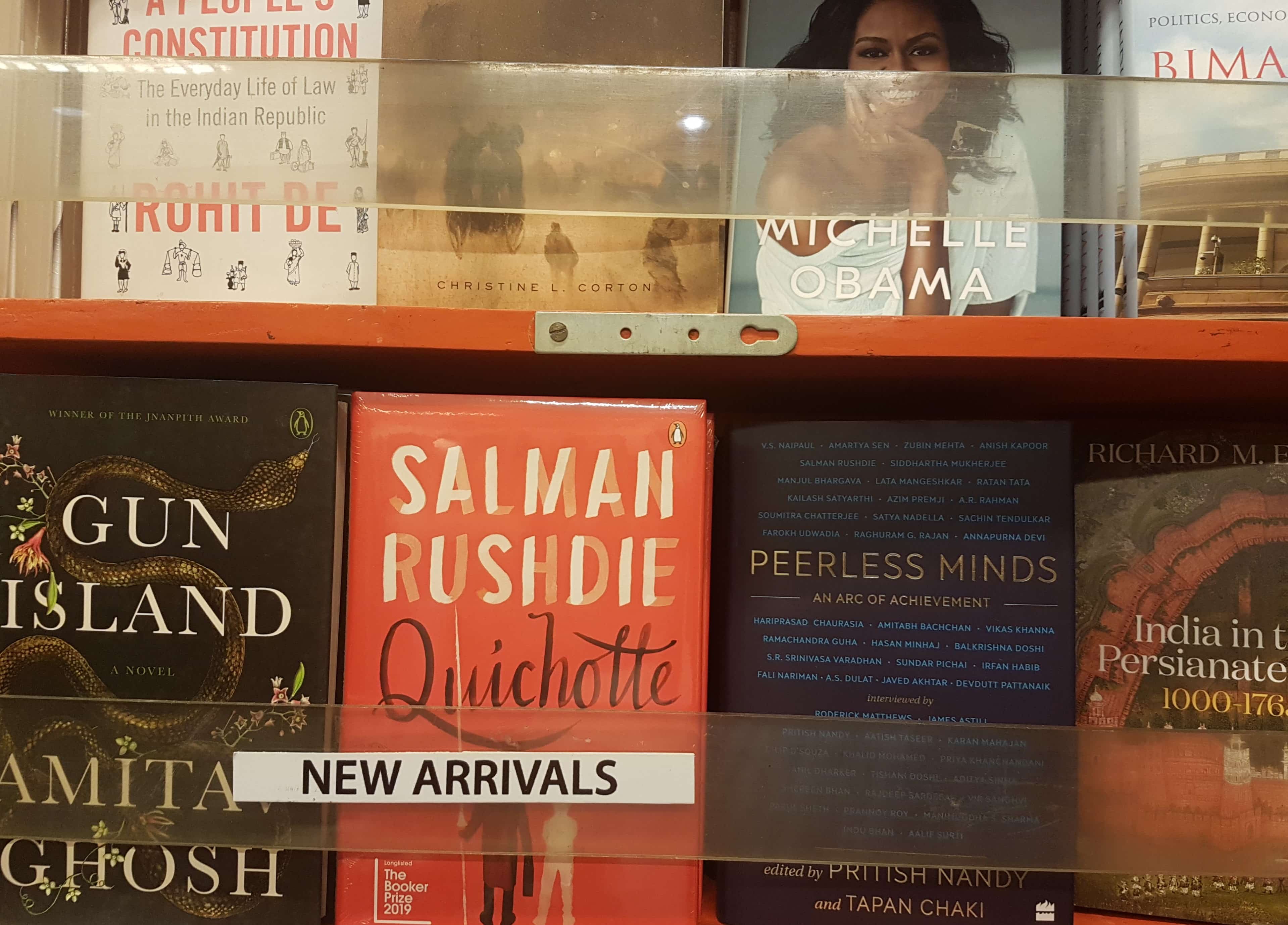 Salman Rushdie, the Booker-Prize winning author of Midnight’s Children, is a British author of Indian origin but currently residing in the USA. His latest novel, Quichotte, takes the reader through his protagonist Quichotte and his unreal son Sancho and the narrator within the story SamDuChamp in the backdrop of three countries: the USA, the UK and India.

Aware of the pitfalls of the pronunciation of the title of the novel Quichotte, Rushdie presents a note in the novel ‘A QUIXOTIC NOTE ON PRONUNCIATINO’: ‘Quichotte, pronounced ‘key-SHOT’ in French and ‘key-SHOT-uh’ in German, and Chisciotte, pronounced ‘key-SHO-tay’ in Italian, are alternative spellings/pronunciations of the Spanish Quixote or Quijote pronounced ‘key-HO-tay’.  Portuguese also uses a ‘sh’ sound rather than a ‘h’ sound for the x or j in the middle of Don Quixote/Quijote’s illustrious name. Cervantes himself would probably have said ‘key-SHO-tay’ in the Spanish of his time. For the purposes of this text, the recommended pronunciation is the elegant French ‘key-SHOT’, for reasons which the text itself will make clear; but, gentle reader, suit yourself. To each his/her/their own articulation of the universal Don.’

The story opens with the life of Quichotte: ‘There once lived, at a series of temporary addresses across the United States of America, a travelling man of Indian origin, advancing years and retreating mental powers, who, on account of his love for mindless television, had spent far too much of his life in the yellow light of tawdry motel rooms watching an excess of it, and had suffered a peculiar form of brain damage as result. …’

At times in the novel, it seems to be more puerile playfulness with the words rather than anything substantial to the plot and characters imagined, inventing comedy in words of names of an ethnic group trying to evoke comedy for the readers. The main character’s name is one Mr Ismail. The author writes, “In addition, his itself was cheerful: It was Smile. Mr Ismail Smile, Sales Executive, Smile Pharmaceuticals Inc., Atlanta, GA, it said on his business card. As a salesman he had always been proud that his name was the same as the name of the corporation whose representative he was. The family name. It lent him a certain gravitas, or so he believed. This was not, however, the name by which he chose to be known during his last, most foolish adventure.

“(The unusual surname Smile, by the by, was the Americanised version of Ismail, so the old travelling salesman was really Mr Ismail Ismail, or alternatively, Mr Smile Smile. He was a brown man in American longing for a brown woman, but he did not see his story in racial terms. He had become, one might say, detached from his skin. This was one of the many things his quest would put in question, and change.)”

In the ‘the Age of Anything-Can-Happen’ in the novel many things happen, back and forth, into real and unreal situations at times the characters are gripping to read but at other times it becomes un-gripping to read especially when the unreal son of the protagonist enters the story!

WHO IS THE AUDIENCE OF THE BOOK?

Salman Rusdhie’s readers especially Quichotte should be aware of movie stars of the real world, about deep-tissue massage and massage with happy ending, about Holi and Bakr Eid and Hindu karma and Cheeta Brand matchbox. Those who are culturally and artistically aware, and knows Greek mythology and Latin phrases may appreciate his allusions. Note the following passage: ‘… He was a tall, one might even say an elongated, man, of the sort one encounters in the gaunt paintings of EL Greco and the narrow sculptures of Alberto Giacometti, and although such men are (for the most part) of a melancholy disposition, he was blessed with a cheerful smile and the charming manner of a gentleman of the old school, both valuable assets for a commercial traveller. …’

Amour fou: ‘…that so magnificent a personage would not simply keel over with joy at the first declaration of amour fou from a total stranger. …’

The story weaves with characters from the second and first person points of view, and uses modes of communications in tune to the current times – GIFs, emojis and Bitmojis: “In response to his post there were frown emojis and Bitmojis wagging fingers at him reprovingly and there were GIFs of Salma R herself, crossing her eyes, sticking out her tongue, and rotating a finger by her right temple.”

The author is inspired by Cervantes’ classic novel ‘Don Quixote’ and narrates a story of the modern age akin to Cervantes. If a reader is a fan of Salman Rushdie’s works, s/he may read it and if one wants to know about Indians and émigré Indians in the UK and the USA – family intrigues, soured relations among relatives, inheritance, diseases and dreads. … And about how they fall prey to the American opiods or substance abuse such as the female lead in the novel: “As a cursory glance at the contents of her bathroom cabinet would reveal even to the untutored layperson, Miss Salma R was almost as expert in pharmaceuticals as her compliant pharmacist, so she knew about the dangers of misuse. Crushingg, chewing, snorting or injected the dissolved product will result in the controlled delivery of oxycodone and can result in overdose and death. She knew that. But oh dear she did misuse it. She did not inject the dissolved product, because she was squeamish about needles, … would be bad for business.”