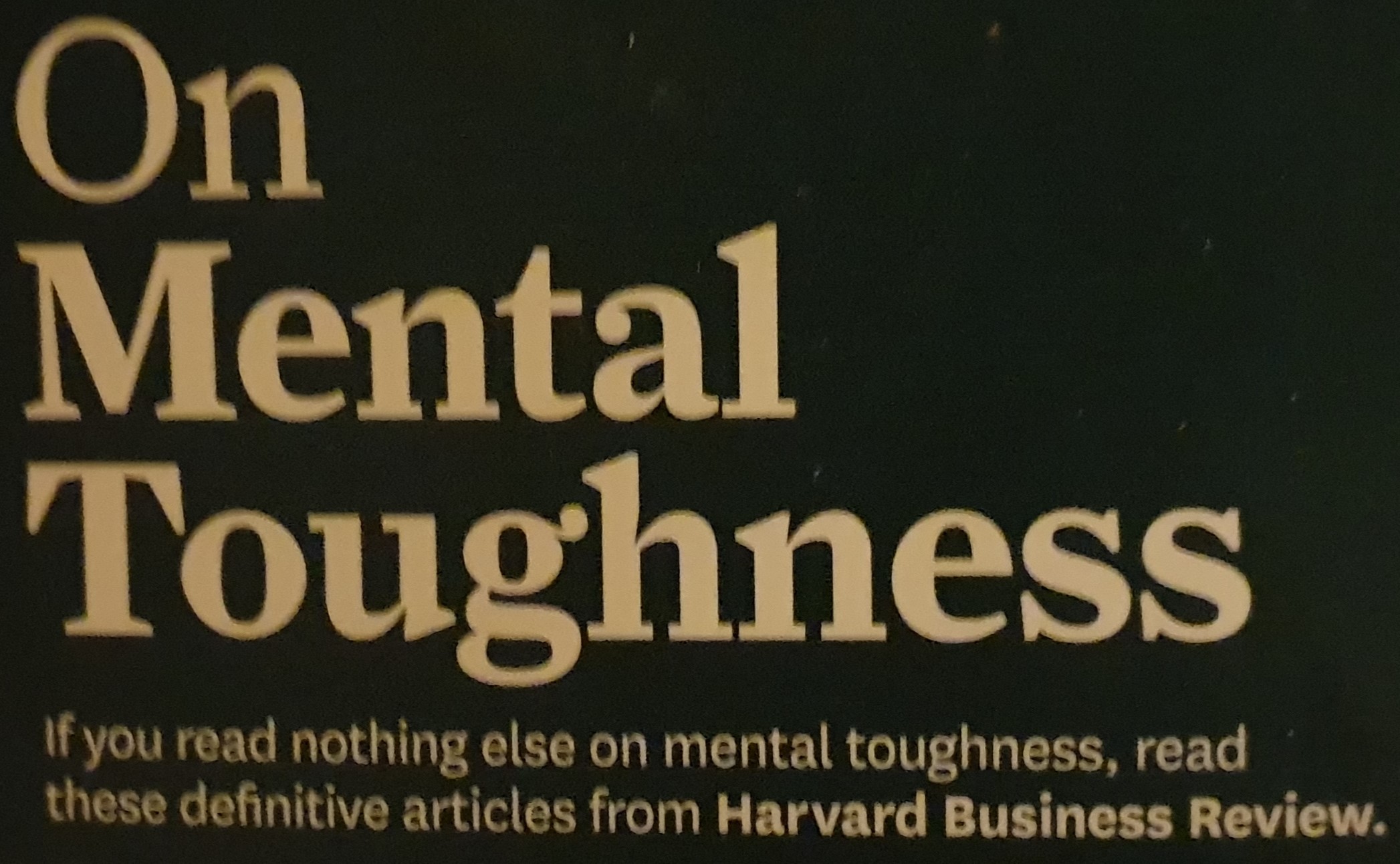 Cognitive skills can be acquired particularly to deal with adversity and come out of adversity. With cognitive skills one can turn a stressful situation into an opportunity, build resilience among others. How can one gain cognitive fitness, and how can one acquire some cognitive techniques to enhance one’s performance in one’s professional life? Build your mental strengths (mental push-ups, brain exercises), and the mental strengths can overcome physical degradation. Mental fitness is also learning new skills and acquiring expertise in an area such as playing a cello, reading funny books, playing games, finding what you are not learning, taking notes-and then go back and read them, trying new technologies, exercising, speaking a foreign language, driving a taxicab which ‘expands and makes more communicative the neural systems in the parts of the brain responsible for motor control and spatial navigation’.

On ‘Mental Toughness’ is a book published by Harvard Business Review (HBR) which is a collection of definitive articles on mental toughness from Harvard Business Review Press, Boston, Massachusetts, 2018. Mental Toughness is rated as HBR’s 10 MUST READS. One of the reasons for this is the articles in the book are written by professionals and experts who have had conducted research or lived through tough situations and experienced unanticipated adversities in life. The authors bring the insights into the brain and how one can build mental toughness and cognitive discipline.

MIND-SET: Get out of the ‘self-limiting mind-set’

Self-limiting mind-set is a state of mind one creates for oneself or one would possibly live one’s life within that mind-set: limited, but that mind could be limitless. ‘UNTIL 1954, MOST PEOPLE BELIEVED that a human being was incapable of running a mile in less than four minutes. But that very year, English miler Roger Bannister proved them wrongs,’ Graham Jones writes about self-limiting mind-set in the first chapter of the book ‘How the Best of the Best Get Better and Better’. ‘Doctors and scientists said that breaking the four-minute mile was impossible, that one would die in the attempt,’ Bannister is reported to have said afterward. “Thus, when I got up from the track after collapsing at the finish line, I figured I was dead.” Which goes to show that in sports, as in business, the main obstacle to achieving “the impossible” may be a self-limiting mind-set.’

Graham Jones PhD is a sports psychologist. He was the Professor of Elite Performance Psychology at the University of Wales in Bangor, and the author of ‘Thrive on Pressure: Lead and Succeed When Times Get Tough’.  He mentions that to stay at the top of one’s profession one has to be comfortable in high-stress situations, and for that one has to devote oneself passionately to self-improvement. How do top athletes do? He writes, ‘Managing pressure is a lot easier if you can focus just on your excellence. Top sports performers don’t allow themselves to be distracted by the victories or failures of others. They concentrate on what they can control and forget the rest. They rarely let themselves be sidetracked by events outside a competition.’  He suggests professionals in sports and corporate or business sector to fixate on the long term goals and aspirations, to train with the people who will push you to the hardest, reinvent yourself, show an insatiable appetite for feedback (a quality in top business performers), keep up to date on cutting-edge technology, and celebrate victories.

finding a meaning in a negative events; dealing with adversity, positively

What makes one a leader? Do leaders in business and leaders in politics have a special DNA? No. In the chapter on ‘Crucibles of Leadership’ Warren G. Bennis and Robert J. Thomas write: ‘AS LIFELONG STUDENTS OF LEADERSHIP, we are fascinated with the notion of what makes a leader. Why is it that certain people seem to naturally inspire confidence, loyalty, and hard work, while others (who may have just as much vision and smarts) stumble, again and again? It’s a timeless question, and there’s no simple answer. But we have come to believe it has something to do with the different ways that people deal with adversity. Indeed, our recent research has led us to conclude that one of the most reliable indicators and predictors of true leadership is an individual’s ability to find meaning in negative events and to learn from even the most trying circumstances. Put another way, the skills required to conquer adversity and emerge stronger and more committed than ever are the same ones that make for extraordinary leaders.’

Warren and Robert mention that people who show leadership have a love for learning, strong sense and commitment for values. People with qualities of leadership demonstrate positive attitude in negative situations: crucibles as opportunities for reinvention.

A transformative event is a crucible. A crucible is a severe test or a severe trial. Crucible is an intense, often traumatic and it is always unplanned or unanticipated. ‘We came to call the experiences that shape leaders “crucibles,” after the vessels medieval alchemists used in their attempts to turn base metals into gold. For the leaders we interviewed, the crucible experience was a trial and a test, a point of deep self-reflection that forced them to question who they were and what mattered to them. It required them to examine their values, question their assumptions, hone their judgment. And, invariably, they emerged from the crucible stronger and more sure of themselves and their purpose—changed in some fundamental way,’ write Warren G. Bennis and Robert J. Thomas

What is in store for one in the future is not laid out in black and white: many unplanned and unanticipated things can happen and some of them could be traumatic or problematic or stressful. One can overcome an adverse situation with resilience. In the chapter ‘Building Resilience’ the father of positive psychology Martin E.P. Seligman writes:  ‘Although I’m now called the father of positive psychology, I came to it in the long, hard way, through many years of research on failure and helplessness. In the late 1960s I was part of the team that discovered “learned helplessness.” We found that dogs, rats, mice, and even cockroaches that experienced mildly painful shock over which they had no control would eventually just accept it, with no attempt to escape. It was next shown that human beings do the same thing.’

“Failure is one of life’s most common traumas, yet people’s responses to it vary widely. Some bounce back after a brief period of malaise; others descend into depression and a paralyzing fear of the future.” –The father of positive psychology Martin E.P. Seligman

One can come out of a trauma or an adversity by building mental toughness, building signature strengths, and building strong relationships.

In spite of not-so admirable habits such as smoking and drinking, how could Winston Churchill (1874-1965) the two-time Prime Minister of the UK could live to be a nonagenarian? One of the reasons his cognitive fitness. Roderick Gilkey and Clint Kilts observe, ‘WINSTON CHURCHILL WAS OUTSPOKEN on the sacred rites of smoking cigars and drinking alcohol before, after, and during meals—and in the intervals in between. But he was also exceptionally active mentally. As historians have noted, Churchill went on to live until 90. That speaks volumes for the information that is now coming to light about how the brain can affect the body.’

Roderick and Clint Kilts refer Socrates, Copernicus and Galileo who were in their peak of intellectual powers in their sixties and seventies; and the business leaders Alan Greenspan, Warren Buffett and Sumner Redstone. ‘These icons and others like them have intuitively understood that the brain’s alertness is the result of what we call cognitive fitness—a state of optimized ability to reason, remember, learn, plan, and adapt that is enhanced by certain attitudes, lifestyle choices, and exercises. The more cognitively fit you are, the better you will be able to make decisions, solve problems, and deal with stress and change. Cognitive fitness will allow you to be more open to new ideas and alternative perspectives. It will give you the capacity to change your behaviours and forecast their outcomes in order to realize your goals. You can become the kind of person your company values most. Perhaps more important, you can delay senescence for years and even enjoy a second career.’

“To exist is to change, to change is to mature, to mature is to go on creating oneself endlessly.” –Henri Bergson

The book suggests to lay a firm foundation for mental fitness such as: Actually do all those healthy things you know you ought to do (always eat breakfast, drink four to five 12-ounce glasses of water daily even if you don’t feel thirsty), go to bed early and wake up early, maintain a consistent bedtime and wake-up time, seek recovery every 90 to 120 minutes and do at least two weight-training workouts a week.