Baba is the first Marathi movie which is going to be released in South Korea. The Movie is produced under the banner of Sunjay Dutt production and distributed by Indywood Distribution Network (IDN). The movie releases in South Korea on 24th August. The movie was released in India on 2nd August and proved to be a great success. 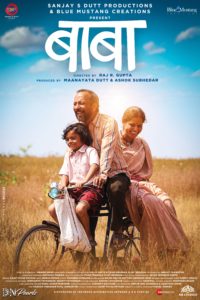 ‘Baba’ portrays a story of a middle-class family life.

The audience get to see an impressive performance from child artist Aryan Meghji and Bollywood actor Deepak Dobriyal, who are set to share the screen together as father-son duo for the first time. The Marathi venture, directed by Raj Guptahas Deepak Dobriyal, Nandita Dhuri, Abhijeet Khandkekar, Spruha Joshi, Chittaranjan Giri in its lead star cast.

With the intention to support art worth movies and share it worldwide, Sohan Roy’s Indywood Distribution Network(IDN) focuses on 40 countries which includes U.S.A, Australia, New Zealand, Middle East and many other.