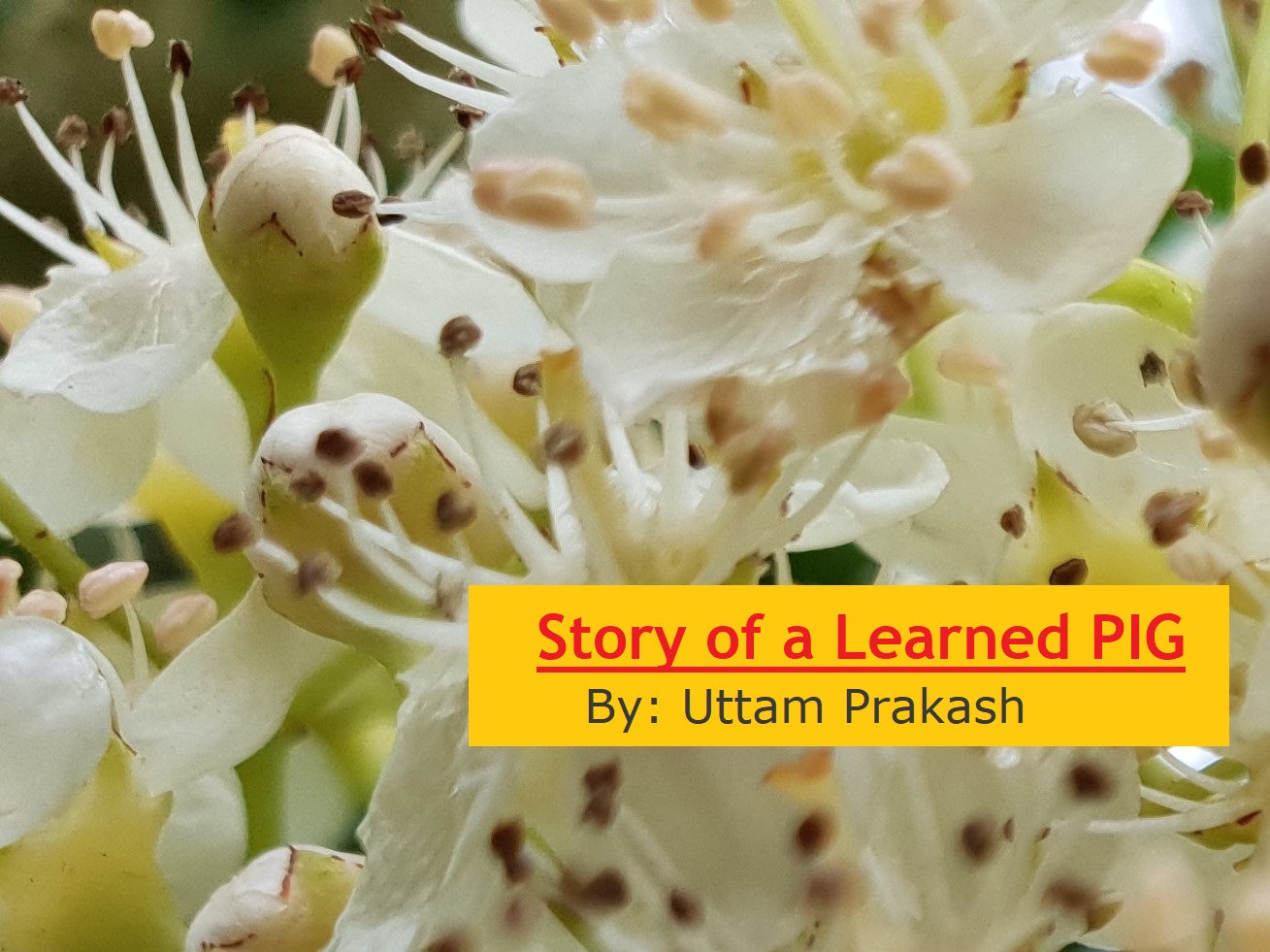 Story of a Learned PIG

Once upon a time there lived a respected devout Hindu Brahmin in a village on the foot hills of Himalayas. He devoted all his time either in praise of the God or acquiring knowledge for human good.

Over the period he became so knowledgeable that he could not only see past events but could also predict the future. His predictions were so accurate that he earned a reputation of a living God repository of all knowledge for a purposeful life.

One morning, he became curious about his own future. Since he knew everything about his current life, he thought of exploring his next birth as a Hindu believes that each being has an immortal soul, and migrates to another body after death.

So he closed his eyes in meditation. In a couple of minutes he saw himself on his death bed. He could see his serene face resting comfortably on a clean new dazzling white pillow. His sons and his little granddaughter whom he loved the most were by his side. The feeling was of immense bliss and contentment. Suddenly a strange dazzling blue light like a huge ocean turf began surging towards him. The light gradually grew in circles as if it wished to touch his feet for blessings. In a fraction of a second it cuddled and embraced him giving him profound pleasure never ever experienced.

The light then began to fade dissolving his body into some deep cold darkness. In a fraction of a second later, to his rude shock, he found himself one amongst few loitering pigs in the thick of filth. The morning air rather being fresh smelt of disgusting garbage soaked with human and animal faeces. Before he could understand anything he saw dirty-faced, uncombed filthy looking urchins, pelting stones at him. This was unbelievable considering his deeds in this life. And his meditation was broken with puke on his lap.

Deeply frustrated, he wished to know the reasons for this and any possible corrective action. It took many days to conclude that there was no escape from this birth as unintentionally he had committed a sin of despising a holy man about his uncleanness. An idea however struck him, that if it was possible to die soon after taking birth, then he will be spared of this disgrace at the earliest. Immediately he called his sons. Sharing this grief, he requested them to kill him soon after he is born. The sons agreed.

As per the prediction, the Brahmin died. The sons however got busy in the rituals that accompany a Hindu cremation and forgot the promise made to their dear father. After 13 days when the rituals got over, his sons realized that their father must be in great pain. With deep guilt about not able to fulfill the last wish of their father well in time, they rushed to the indicated place armed with sword and sticks.

Reaching the place indicated by their father, they found a small piglet rolling around digging filth. Its coarse dark haired body was glistening in the morning sun. Seeing them around, it raised its snout drenched in dripping mud. Blinking its small eyes it began waging its small curly tail as if in great pain. Identifying their father, the sons rushed towards it with a determination to free its soul. As they neared, the piglet screamed and slipped away. The chase began with the piglet leading and the sons following. After lot of jostling around, the piglet was eventually cornered. At this moment one of the sons raised a sword for the lethal blow.

Finding this as the last moment in its life the pig raised its two little legs, as if with folded hands and pleaded Son!!! Stop where you are. Spare me. Let me enjoy this southerly breeze that is blowing through my snout. Let me live if you have any respect for your father. “Trust me I am ok and I am enjoying”.

Moral: If you are in a mess and you know about of it, act immediately in whatever way you can, before you start enjoying the mess.

Uttam Prakash lives and works in New Delhi, India. He works for the Government of India, but in his spare time, he paints, writes, and photographs nature.