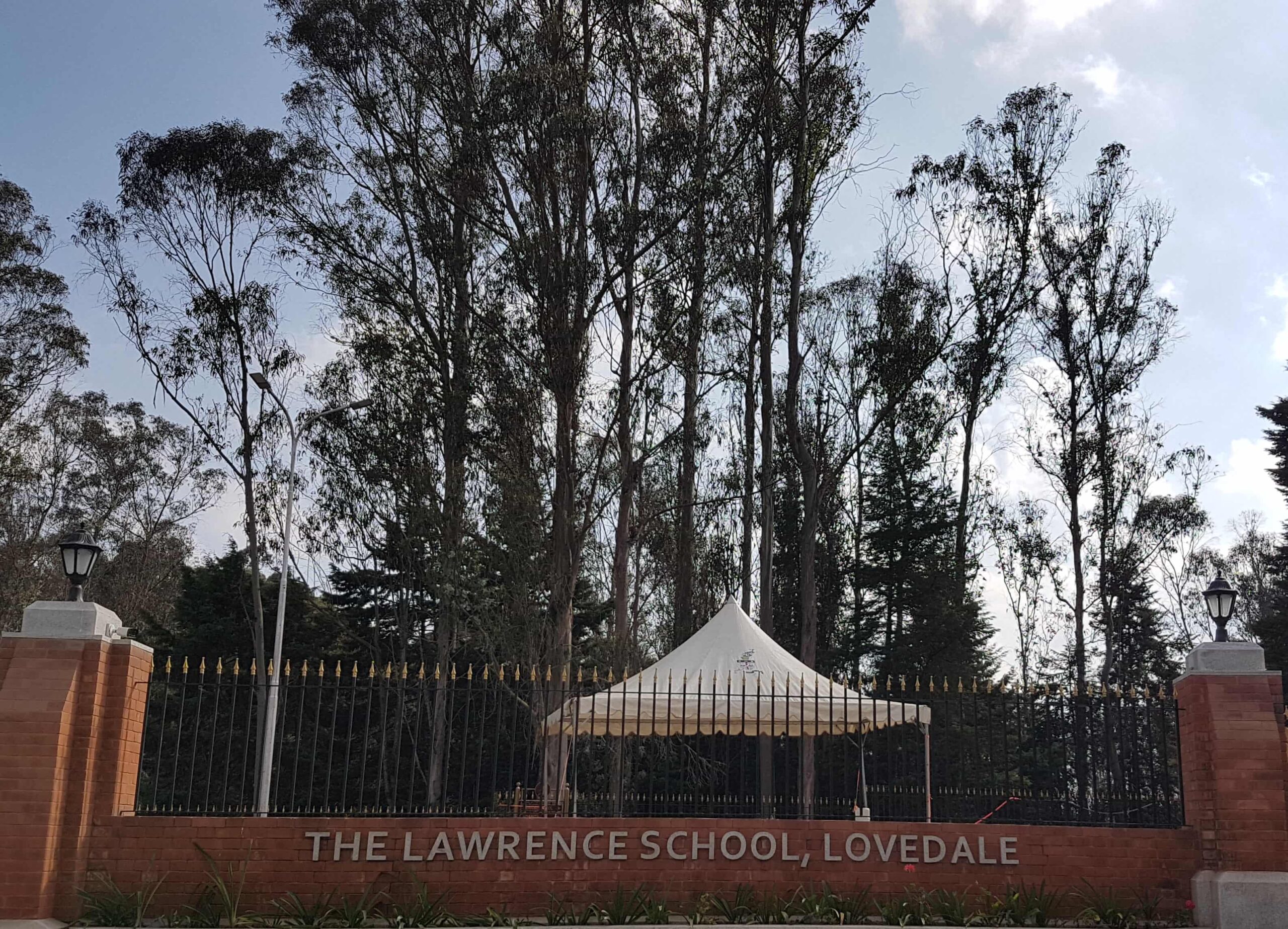 The Lawrence School is located in Lovedale, situated on the central plateau of the Nilgiri Hills, about 6 kilometres from Ootacamund. At 7200 feet above mean sea level, the altitude affords a temperate throughout the year.  The school is spread over 710 acres, and close to Lovedale railway station. Lovedale is one of the railway stations on the the Ootacamund-Mettupalayam metre gauge railways.

FACTS OF THE SCHOOL:

The school aimed to provide vocational education to the orphans and the other children of European soldiers in India.

Todays it has metamorphosed into one of the premier residential public schools in India.

One of the building of the school is a magnificent two-storey building along with a towering campanile, 130 feet, built in Italian Gothic style amidst 700 acres of pristine forests.

The School was under British administration until May, 1949, after which the school was handed over to the Government of India.  On the 6th of September, 1949, the School was presented the Indian Union colour, which replaced the old King’s Colour.  The administration of The Lawrence School, Lovedale is vested in an autonomous body known as the Board of Governors appointed by the Government of India, Ministry of Human Resource development.  The School is neither exclusive nor elitist and it maintains a Secular and Cosmopolitan culture.  In fact, the School is a miniature India, for children from many communities from all parts of the country and overseas, study here. They are brought up in an atmosphere that fosters a spirit of co-existence and respect for the feelings and beliefs of others.

It is maintained as a public school: open to all but with a 40 percent reservation of seats, and a 20 percent fee subsidy for children of Defence Personnel.

The Lawrence Schools in India were founded by Major General Sir Henry Lawrence as asylum centres as well. The Lawrence School in the Nilgiris district in Tamil Nadu was built as a memorial to Major General Sir Henry Lawrence (1806-1857). In early 1856, Major General Lawrence offered Rs 5000 down payment, and Rs 1000 per annum if action were taken to found, at some Madras hill-station an asylum similar to those already established at Sanawar and Mount Abu. In February of 1856, a meeting was held in Ootacamund to make every effort to carry out the project. From the beginning, difficulty arose as to the religious principles to be inculcated at the institution. However, a prospectus for ‘The Ootacamund Asylum for the Orphans and other children of European soldiers in India’, on a strictly Protestant basis, was issued. A committee was formed with Bishop Dealtry as its President.

Major General Sir Henry Lawrence CB, BT, Lt Col, ADC to Queen Victoria:   Sir Henry Montgomery Lawrence (born 28 June 28, 1806 at Matura in Ceylon – the present day Sri Lanka – and died on 4 July 1857 at Lucknow in British India). He was a soldier and administrator who helped to consolidate British rule in the Punjab region. After joining the Bengal artillery in 1823, Lawrence served at the capture of Arakan in the First Anglo-Burmese War (1824–26).

He studied the Urdu, Hindi, and Persian languages and in 1833 joined the survey department of the North-Western Provinces. Placed in charge of Firozpur, in the Punjab (1839), acquired a substantial knowledge of Sikh politics, and in 1846 was appointed agent, and later resident at Lahore.

He reduced the Sikh army, suppressed mutinies in the Kangra region and in Kashmir, and deposed the wazīr (Muslim executive officer) Lal Singh.

After the Treaty of Bhairowal (1846), the British part in Sikh rule was apparent when Lawrence prepared a Sikh legal code that gave him the power to forbid suttee (self-immolation by widows on their husbands’ funeral pyres), infanticide, and forced labour.

Knighted in 1848 while on home leave, he returned to India when the Second Sikh War (1848–49) broke out. He was made president of the board of administration of the newly annexed Punjab. He was in charge of political affairs while his younger brother, John, supervised finance. Henry favoured treating the Sikh aristocracy with generosity by granting them life pensions and large estates, while John wished to improve the status of the common people by reducing taxes and limiting landlords’ rights.

Policy conflicts with his brother led Henry to seek a transfer, and in 1852 he was assigned to Rajputana.

In 1857 he was summoned to Oudh (Ayodhya), where annexation, precipitate land reforms, and a mutinous army had created a grave situation. He effectively delayed the mutiny at Lucknow and prepared the residency for its famous defense of a six-month siege during the Indian Mutiny (1857–58). He was mortally wounded on July 2, and at his death he did not know that the British government had nominated him provisional governor-general. The committee then sought the aid of the Government, but the latter said that their action would depend on the support received from the Army. It must be noted that the Commander-in-chief objected to the restriction of the institution to Protestants. The Government also stated that the institution must adopt the rules of the Sanawar Asylum from which the committee proposed to deviate. In February 1856, a meeting was held in Ooty to make every effort to carry out the project. The difficulty arose as to the religions principles to be inculcated at the institution. It was started as Ootacamund Asylum for the orphans and other children of European soldier in India on a strictly Protestant basis. Sought help from the government (Madras Presidency) and East India Company. Started as ‘The Ootacamund Asylum for the Orphans and other children of European soldiers in India’, on a strictly Protestant basis, was issued. In his will, Sir Henry Lawrence had commended the scheme (founding of an Asylum at a hill station under the Madras Presidency) to the care of the East India Company. This led to the project being revived in 1858. At a meeting held in Ootacamund, in August of the same year, it was resolved to found the institution by adopting the Mount Abu rules. A new committee was formed of which Bishop Dealtry was again the Patron, and in early in 1859, the ‘Stone House’ was purchased at the cost of Rs.22,600 for the institution – leading to The Lawrence School, Lovedale.

In his will, Sir Henry Lawrence had commended the scheme (founding of an Asylum at a hill station under the Madras Presidency) to the care of the East India Company. This led to the project being revived in 1858. At a meeting held in Ootacamund, in August of the same year, it was resolved to found the institution by adopting the Mount Abu rules. A new committee was formed of which Bishop Dealtry was again the Patron. Early in 1859, the ‘Stone House’ was purchased at the cost of Rs.22,600 for the institution, which is today’s The Lawrence School, Lovedale.

Public schools in England (the United Kingdom) are fee-charging endowed schools originally for older boys which were public in the sense of being open to pupils irrespective of locality, denomination, and paternal profession, and were usually boarding schools. Because these public schools are fee-paying schools and are associated with children of privileged backgrounds, ruling classes or elite or high-income groups. Historically, children of officers and senior administrators of the British Empire were educated in England while their fathers were on overseas postings. According to a report, in 2019, two thirds of British cabinet ministers had been educated at fee-charging schools or public schools. The public-funded or government-run schools in the UK are called state schools. There are many schools in India that are private schools (but public schools in British English) and are also called boarding schools because they provide boarding for the pupils.