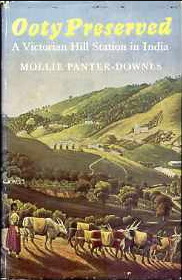 One of the chroniclers of Ooty, the headquarters of the Nilgiris district in the Indian state of Tamil Nadu, is Mary Patricia ‘Mollie’ Panter-Downes. She is the author of ‘Ooty Preserved: A Victorian Hill Station in India’ first published in 1967. She wrote the book after visiting Ootacamund (Ooty) in India, the book was preceded by columns in the New Yorker. The columns were published as Ooty Preserved. She was in Ooty on an assignment for The New Yorker.

Ooty Preserved: A Victorian Hill Station in India evokes the bygone and existent structures, and snippets of the town. The book ‘rather charmingly commemorated in this quintessentially Victorian village in the Blue Hills of South India–the Queen of the Hill Stations (superseding Kipling’s Simla)–a little “patch of England” where the sun has never set. GoodReads.com says ‘Mrs. Panter-Downes makes a tour of Ootacumund, Ooty, lovely Ooty from its 19th-century existence as a small spiritual spa with tonic air for English exiles to today, with its dwindling number of Europeans (chiefly widows and daughters) and the faint encroachment of modern times–a film factory. Around she goes, from its Government House to its Library to its Club to its Old cemetery which Sir Richard Burton said was already “so extensive, so well stocked” over a hundred years ago. Along with its photographs (some of old aquatints) this is a somewhat pleasing but limited literary daguerrotype with amusing period appointments.”

Mary Patricia ‘Mollie’ Panter-Downes (25 August 1906 – 22 January 1997) was a British novelist and columnist for the New Yorker. As a teenager, she wrote The Shoreless Sea which became a bestseller (eight editions were published in 1923 and 1924, and the book was serialised in the Daily Mirror). Her second novel The Chase was published in 1925. Her parents were Major Edward Martin Panter-Downes and Marie Kathleen Cowley who was of Irish origin. After her marriage to Clare Robinson in 1927, the couple moved to Surrey, and in 1938 Panter-Downes began writing for the New Yorker –  a series of short stories and a column entitled ‘Letter from London’, which she wrote until 1984. The collected columns were later published as Letters from England (1940) and London War Notes (1972). Her other books are: Storm Bird (1929), My Husband Simon (1931), One Fine Day (1947), Minnie’s Room (short stories collected between1947–1965), Good Evening, Mrs Craven (short stories collected between 1938–1944), and At The Pines (biography of Swineburne 1971).

A short story in Minnie’s Room titled “The Empty Place”, which was written in 1965, has character named Harry Potter.