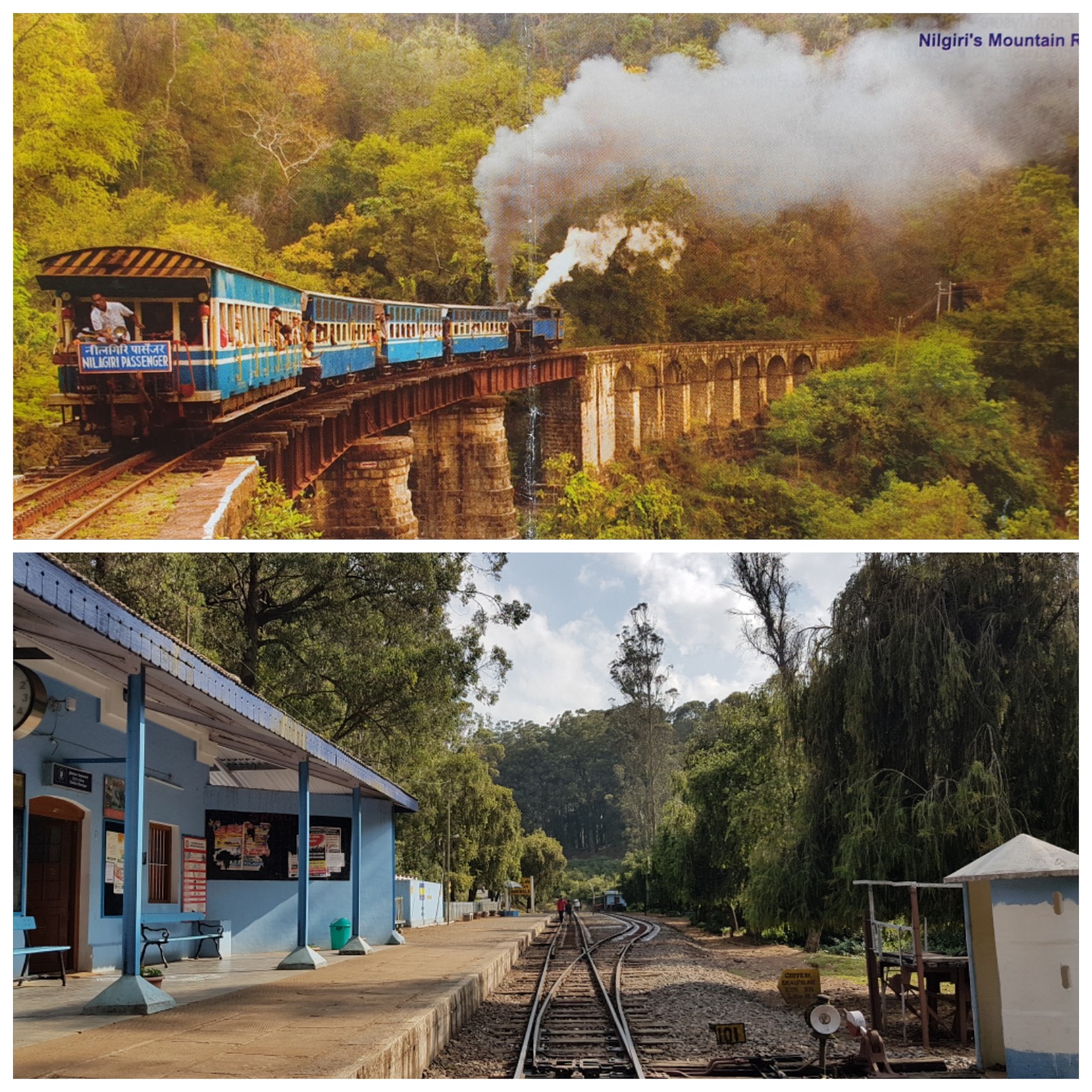 Nilgiri Mountain Railway in the Nilgiris and Coimbatore districts of Tamil Nadu in southern India is a metre gauge railway line (1,000 mm, 3 ft 3 3⁄8 in) built during the British colonial era in 1908. Nilgiris Mountain Railways is operated by the Southern Railways, Ministry of Railways, Government of India. It is the only rack railway in India, and relies on steam locomotives, switched to diesel locomotives between Coonoor and Udhagamandalam.

Nilgiris Mountain Railway was declared as the World Heritage Site by UNESCO in 2005 along with Darjeeling Himalayan Railway and the Kalka-Shimla Railway. These three railways are collectively designated as a UNESCO World Heritage Site under the name ‘Mountain Railways of India’. Nilgiri Mountain Railway informs: “Nilgiri Railway Company constructed the railway from 1886 to 1899 between Mettupalaiyam (Mettupalayam) and Coonoor using ‘Alternate Biting Teeth’ technology in the ‘Rack and Pinion’ arrangement between the rails. The railway has the steepest gradient of 1:12 in Indian Railways. In January 1903 the railway was purchased by government and construction between Coonoor and Udhagamandalam (Ooty) was completed in 1908. It is a metre gauge track, 46 km. long and rises 6159 feet from Mettupalaiyam to Ooty that is 7228 ft. above sea level. The region is famous for rich tribal culture and bio-diversity. UNESCO conferred World Heritage to Nilgiri Mountain Railway in the year 2005.”

The plan to build a mountain railway from Mettupalayam to Ooty (Udhagamandalm) in the Nilgiris Hills occurred to the colonial rulers in 1854; it took decades to see its light, and work started in 1891 and in 1907, the railway received four Double Fairlie locomotive works built by the Avonside Engine Company in 1879 and 1880 for service in Afghanistan, but arrived here, and completed in 1908. The steam rack locomotives were imported from Swiss Locomotive and Machine Works, Winterthur, Switzerland. The 46-km long metre-gauge single-track railway scales an elevation of 326 m to 2,203 m.

Beilby Lawley, 3rd Baron Wenlock, (12 May 1849 – 15 January 1912) was the Governor of Madras Presidency during 1891 to 1896. Educated at Eton College and at Trinity College, University of Cambridge, he worked for the British Empire. During his stint in India, he laid the foundation stone for the Nilgiri Mountain Railway, in August 1891 when he was Governor of Madras Presidency. During his governorship in British India, there was a famine during 1891–92 but insisted on exporting the grains from Ganjam and Viazgapatm districts (in Andhra Pradesh), which worsened the situation and made him unpopular. However, Lawley was lauded for establishing established the Board of Mohammedan Education in 1893. The Wenlock Ward of General Hospital, Madras was established in his memory. He returned to England, and was made Lord of the Bedchmaber to the Prince of Wales (later, George V), Wenlock Downs in Ooty was also named after him.

STATIONS ON THE JOURNEY:

UNESCO mentions the three mountain railways are awarded the world heritage status for their outstanding examples of innovative transportation systems built through difficult terrain and for outstanding Universal Values. It says: “The construction of the Nilgiri Mountain Railway, a 45.88 kilometer long meter-gauge single-track railway was first proposed in 1854, but due to the difficulty of the mountainous location the work only started in 1891 and was completed in 1908. This railway, scaling an elevation of 326 meters to 2,203 meters, represented the latest technology of the time and uses unique rack and pinion traction arrangement to negotiate steep gradient.”